IWSG and the Confederate Ghosts of Johnson's Island 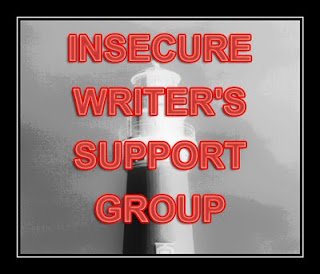 Happy August, all! The first Wednesday of the month means it's time for the Insecure Writer's Support Group, hosted by the Ninja Captain himself, Alex J. Cavanaugh. Click here to see this month's co-hosts and the list of participants, and add your name to the list if you'd like to join us!

Earlier in the summer I said I was going to work on two manuscripts at once in the hopes of getting my butt in gear on the writing front. Sadly all I managed to do was stall and get nowhere on two manuscripts instead of one. With the summer winding down, I'm feeling irritated with myself that I have been so unproductive, and insecure that maybe I will just never get these manuscripts completed.

But then I remembered there are still five months left in the year so I have time to make sure 2015 isn't a total wash. I went back over both stories and I still love them and want to finish them, so I'm not throwing in the towel yet. I hope by next month's meeting I'll be able to share some progress.

In other news, a few weeks ago when I was on vacation I traveled around Lake Erie and had a great time visiting some of the towns and sites there. It's only a 4 hour drive from Cincinnati so it's kind of nuts I'd never done any exploring there, but better late than never. Anyway, I actually managed to get some inspiration for one of the stories that I've been stewing over while I was there. 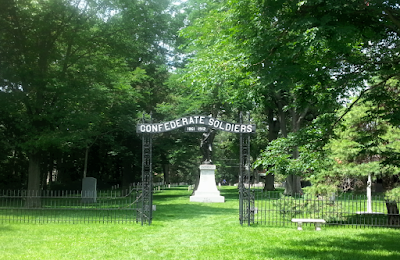 I visited Johnson's Island, which was the home of a Union POW camp during the Civil War. The camp was made up of 13 barracks which sat right on the shores of Lake Erie. During the winter, the icy winds and snow coming off the lake made for miserable conditions for the prisoners, to put it mildly. Over the course of the war more than 11,000 Confederates were housed at the camp.

Today all that remains of the camp is a cemetery which holds 200 graves. There is also evidence to suggest that unmarked mass graves can be found around the island outside the gates of the cemetery. As you can guess, such a place is a fertile ground for stories of ghosts and hauntings.

This statue of a Confederate stands at the entrance to the cemetery and looks out over the lake. There are numerous stories of him coming down and moving around the cemetery, or just changing positions on his base. In addition, several people have reported seeing soldiers moving through the trees or hearing their disembodied voices.

The most interesting story by far to me was about a group of Italian immigrants who were hired to work at the nearby limestone quarry some years after the war. The immigrants spoke no English, yet they were heard singing Dixie, the anthem of the Confederacy. According to legend, the Italian workers heard the ghosts of the dead singing the song of their homeland and picked it up for themselves.

I sincerely doubt that the Italians learned the words to Dixie from ghosts, but it's still a fun story. And as for my own story, it includes a Civil War prison camp in Chicago and a Confederate soldier who is imprisoned there. I wouldn't have thought of it before, but now I think I might just have my ghost sing a little Dixie. :D