Hello, friends! I'm on a bit of a blog break but am popping in to share a dog rescue story from Guilie Castillo as part of the blog tour for her book It's About the Dog: The A-Z Guide for Wannabe Dog Rescuers. I am a sucker for a dog rescue story and this one about a sweetheart named Jake and the wonderful group that worked to save him went straight to my heart. 💓💓

Welcome, Guilie, and thanks for all you do for dogs!


Sometimes rescue just… flows. Sometimes the stars seem to align for the rescuer—and for the dog. Sometimes the dog treats you like a long-lost best friend (and, who knows, maybe in another life you did know each other) and isn’t just willing but eager to jump into your car. Sometimes all it takes is couple of treats and a leash. […]

More often than not, though, rescue gets rough. And, because the universe loves irony, it’s usually the dogs in most urgent need of help who refuse to cooperate. Because they’re in panic, because they’ve been abused and don’t trust humans, because they’re hurt and in pain. Whatever the reason, it comes down to this:

How do you catch a dog that doesn’t want to be caught? 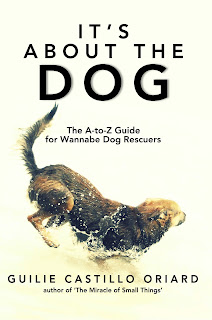 (Excerpt from It’s About the Dog: the A-to-Z Guide for Wannabe Dog Rescuers)


Just last week, a group of rescuers here in Curaçao had one such case. Back at the beginning of April, someone had spotted a dog with a severely in-grown collar at Parasasa Beach, but no one had been able to find him. Then, finally, someone spotted him again, same place, just before sundown. He ran off, though; shy and skittish, probably terrified of humans (probably with good reason).

This dog was not going to come in without a fight.

But the rescuers from Feed Friends Foundation weren’t about to give up. They went back the next day, armed with kennels and leashes and food—good stuff, tasty (and smelly) bits of kidney or liver canned food, which they placed around the beach and laced with Tranquigel (a mild gel sedative; best invention since the dog leash, I tell you). Then they sat, at a distance, and waited.

At sundown, the dog showed up. Among the five rescuers (including a seven-year-old girl, daughter of one of the rescuers—yes, it runs in the blood) quiet cheers went up when the dog, whom they'd started calling Jake, wolfed down the food. Now it was just a matter of time; Tranquigel can take up to an hour to kick in.

Jake had come from the direction of the Marriott property next door, currently being 'renovated' (officially, but us locals have our doubts) and thus closed up. If he made it back there, the rescuers wouldn't be able to follow. It wouldn't matter whether they set out liver or raw tenderloin: no one was going to be seeing Jake until the next morning, when the sedative had worn off and they'd have to start all over again.

Everyone wanted to avoid that. Even at a distance, the wound around his neck looked bad enough to make this an urgent rescue. Jake was going to end this day at the vet, in safety; everyone agreed on that.

Jake, however, had different ideas. An hour had passed, and he showed no signs of calming down. Parasasa Beach is not a quiet spot; the neighborhood is home to several hotels, offices, and restaurants, which mean an abundance of cars and buses and people. And every time any of them came to within five meters, Jake bolted.

The rescuers took up positions between the beach and the Marriott property line, to prevent Jake from escaping in that direction. They tried to close in on him, towels in hand, using every trick in the book—but each time Jake managed to slip away. Finally, with daylight fading fast, they began to consider one last option, an option no one liked: the dog catcher's pole.


Rescuers tend to hate the pole: it's unwieldy, it looks threatening even to a calm dog, let alone a panicky stray. In Jake's case, there was an additional factor: the open wound around his neck where a too-tight collar had bitten into his skin. The pole's looped end had to go around his neck, and none of the rescuers liked the idea of causing this poor dog any more pain.

Many people have the idea that rescuing is a 'fun' thing, all unicorns and rainbows and cuddly puppies. The truth? It's hard-core, and it requires hard-core people. People who rescue have to care about the dog—otherwise why are you out there chasing a dog in the middle of the night?—but they have to be able to make tough decisions. Keep priorities straight. Stay focused on the goal. Do what it takes.

And, right now, it looked like what it took to get Jake to safety wasn't going to be pretty.

They looked at each other, jaws set but eyes glistening. Twilight had come and gone, and in the dark the chances of catching Jake were dwindling with every minute that passed. It was now or never.

They did catch him. As soon as the pole's loop tightened around his neck, he stopped struggling—which, ask any rescuer, is the most heartbreaking moment of any rescue. He was wrapped in a towel to prevent him from biting the odd arm or leg, the loop was loosened and taken away, and he was tucked into a kennel—safe, finally. For the first time in... who knows how long.

Once in the car, with more light, Jake's rescuers were able to get their first good look at him. The in-grown collar was worse up close, and a few nods of we did the right thing were exchanged. Also, they found out why the Tranquigel hadn't worked: other than the wound on his neck, Jake was in pretty good shape. Dirty, long nails, a couple of bald spots, but not emaciated, not even skinny. He had found a good source of food, either scraps left by people on the beach, or a restaurant trash can; whatever it was, it means he has excellent chances of healing quickly and properly. He's also young, probably not much older than a year. His is a success story, and this part, his rescue, is only the beginning.

Jake has been taken in by the Curaçao Animal Rights Foundation (CARF), an organization known for its work with the cases that would stump (and bankrupt) most other rescue groups. They'll provide the best medical care Jake can get, and, when the time comes, they'll make sure he goes to a home where he'll be loved and cherished and spoiled to bits.

Jake is safe. His future is bright and shiny. And none of it would've been possible without the five rescuers who refused to give up that day on the beach. This is my standing ovation to them.

Would you like to contribute to Jake's recovery, and help get others like him to safety? You can donate to CARF here and to Feed Friends here, and a Like on Facebook (CARF, Feed Friends) goes a long way. Rescue, however, is very much like sustainability practices: start local. The best way to help is to get involved with organizations in your area and find out what they need; not everyone can do the chase-down-a-dog routine, and there are plenty of other ways to make a difference. You can help organize fundraising, for instance. You can make flyers. You can donate stuff, or collect it from your neighbors and acquaintances: old towels and bed sheets, bowls, blankets, collars, tags... Seriously, the list is endless.

Julie, thanks so much for having me here today, and for giving little Jake's story a chance to reach, and maybe touch, more people. I'm honored to get the opportunity to share his story, and I'm delighted that it found a home here with you and your readers. Looking forward to chatting with everyone in the comments!

This post is a part of The Dog Book Blog Tour; during April and May, author and book will be making the rounds of dog-loving sites on the blogosphere to talk dogs and rescue—and to give away THREE signed copies (More about both tour and giveaway here.) Come join us!