The Ghosts of Aquinnah Cover Reveal!

I'm so excited to share the cover and blurb for my novel The Ghosts of Aquinnah, which will be released on December 5, 2013 by Ink Smith Publishing. Thanks to the amazing Michael Di Gesu for his fantastic work on both!

First up, the cover! 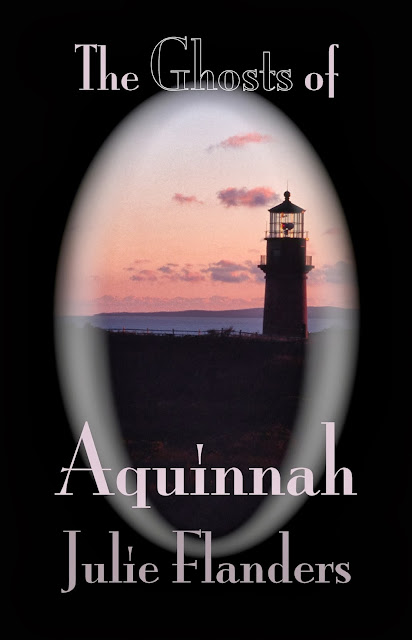 And now the blurb for the story:


A brilliant flash of light transcends through time.

Another freezes a cloaked figure within a frame of salty mist as waves crash against a rocky shore. Her harrowing expression shadows the beacon to a pinprick.

By the next blaze, she is gone. Only the lighthouse remains.

Hannah’s eyes blink in step with each heartbeat. Images of her deceased parents and Martha’s Vineyard explode like firecrackers inside her mind.

She shakes her head.

For weeks this eerie woman dressed in nineteenth century garb has been haunting my webcam, but tonight she stared into my soul.

Casting aside months of research on historic lighthouses, Hannah drives to the coast and boards a ferry.

What is the strange connection she has to this mysterious woman suspended in time?


Thanks again to Michael for all his great work on this! I'm so excited about the novel. And thanks to everyone who is helping me with my reveal this week, you guys are the best!


(If you're here for Melissa Maygrove's Follow Fest, thanks for visiting! My post is here. I have had an unexpectedly busy week and haven't been able to make all the Follow Fest rounds yet, but will get to everyone by the end of the week, I promise!)

As I wrote in last week's post about The Martha's Vineyard Ghost Ship, I am counting down to the release of my novel The Ghosts of Aquinnah in December by sharing stories of haunted places, ghosts, and unexplained phenomena that catch my interest.

This week I learned about the Hoosac Tunnel, which is a 4.75 mile long railroad tunnel that passes through the Berkshires in Western Massachusetts.

The tunnel was built between 1848 and 1874 and 193 people were killed during its construction. This led to the tunnel being known as "The Bloody Pit."

The most infamous tragedy that occurred during the construction of the tunnel was the central shaft accident in October, 1867.  A lighted candle in the hoist of the shaft ignited naphtha fumes and triggered an explosion. The hoist burst into flames and collapsed into the shaft, trapping thirteen men who were working more than 500 feet below the surface. The explosion also destroyed the water pumps and filled the shaft with water.

A few of the dead miners surfaced in the rising water, but some were not found until nearly a year later, when they were discovered on a makeshift raft they had built to float on the rising water. These men had survived the initial explosion and fire, but had eventually suffocated from the deadly fumes.

From this point on, workers reported eerie moaning deep within the tunnel. And some years later, a drilling superintendent and a physician visited the tunnel and reported a dim light which turned a strange blue color and took on the form of a headless human being as it came towards them. Both men insisted the temperature dropped to an icy chill as the figure hovered before them and finally floated off towards the shaft.

In October, 1874, not long before the tunnel was finally completed, a local hunter vanished. He was found three days later stumbling along the banks of the Deerfield river. He claimed that strange voices had lured him into the tunnel and ghostly figures had greeted him inside. The hunter insisted that one of the figures had grabbed his rifle and beat him with it. The man was dazed and in a state of shock, and had no rifle with him. His rifle was never found, and the hunter had no memory of how he ended up at the river.

The following year, a fire tender drove a wagon full of firewood into the tunnel late at night, only to come careening out a short time later. The wagon and the team of horses were found three miles from the entrance to the tunnel, but the driver was never seen again.

Honestly, these last two tales sound like they could easily be about men who were drunk or mentally ill, or perhaps victims of very human gangs of thugs. But then, who knows?

Stories of ghostly encounters at the Hoosac Tunnel continued into the present day and visitors still report shrieks, moans, and howling winds coming from inside.

I've been in western Massachusetts many times and had never heard of the Hoosac Tunnel before, but I can't say I'd be in any hurry to go through it any time soon. I don't like tunnels in general as I feel claustrophobic when going through them, but this is one I'd definitely want to avoid.

If nothing else, the story of the Hoosac Tunnel illustrates the horrific working conditions for miners in those years. That alone is frightening to imagine. And with so many men meeting such a terrifying end there, I could understand if some angry spirits were still lurking around the Hoosac.

Thanks to everyone who has already signed up for my cover reveal for The Ghosts of Aquinnah next week! If you'd like to participate and share the cover any time between 9/30 and 10/5 please sign up below. 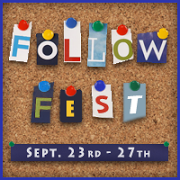 Follow Fest is the brainchild of Melissa Maygrove and runs from today until Friday, 9/27. It's a great way for bloggers to connect with each other and I'm grateful to Melissa for coming up with the idea. If you don't already follow Melissa's blog, you are missing out and should correct that right now. :D

Now for my info:

Fiction or nonfiction? Fiction but I would like to get back in to some nonfiction article writing

What genres do you write? Paranormal, Suspense, Mystery, General Fiction

Do you do anything in addition to writing? Not in the publishing field, but I work as a librarian

Where can people connect with you?

Is there anything else you’d like us to know?

I belong to an amazing writing group called Untethered Realms. Find us at our blog, on Facebook, or on Twitter (@UnRealms).


Thanks again to Melissa for organizing this great fest!

And thanks to everyone who has already signed up for my cover reveal for The Ghosts of Aquinnah next week. If you would like to help please sign up on the Linky List below.

I'm really excited to welcome S.K. Anthony here for an interview as part of her Kinetic Blog Tour. Kinetic was officially released yesterday and I've no doubt it is an excellent read. I'm looking forward to finding that out for myself. Congratulations to SK!!


Tell us about Kinetic.

It follows a broken-hearted Luminary, Annie Fox. She works as a crime-fighter and uses her “special skills” to kick some serious butt. Annie will have to struggle with the fact that her ex-husband, Nick Logan, is now the evil she is supposed to bring down. The problem is, if she even gets close enough to him, she will hand him the weapon that will allow him to destroy everyone she loves: herself.

Kinetic is an urban fantasy. Is this your favorite genre to write in?

Not necessarily. I love the fantasy world, but I’m a sucker for the romantic aspect in all books.

When did you realize you wanted to be a writer?

Probably around the age of fifteen. I always enjoyed writing poems and songs, but in high school, I tried my hand at some short stories and even a five-minute screenplay, and I knew that I wanted to be a part of the writing world. With insecurities though, it took a long time to develop the nerves to go for it.

Do you write full-time or do you also have a “day job?” If so, what is it?

Yes, I have a day job: I’m a mom lol. I’ve been at home for a year now, raising my 2-year-old twins during the day and being a full-time writer at night.

What do you enjoy most about writing?

Possibilities. The possibilities of anything and everything gets my heart pumping!

Anything you don’t enjoy or struggle with when it comes to your writing?

Revisions. I can go from really loving them to really being stressed out by them.

What other passions or interests do you have besides writing?

Sleeping! With little kids and only writing at night, sleeping is a passion of mine lol. I do also love reading, dancing, and running. Though running doesn’t happen as often as I would like.

What would you consider your dream vacation?

At the moment, being in a cabin with a warm fireplace sounds perfect for writing (and sleeping).

Hmm, tough one. I’ll go with Hawaii. It was beautiful, romantic, and exciting!

I think I am a combination of the MC Annie and another character named Kevin. I would say I am least like “the B,” Lisa.

What can you tell us about your next book?

It will be the second book in The Luminaries series and you’ll meet the MC in
Kinetic ;)

Thanks for being here and for answering my questions, SK! It was fun to learn a little more about you. :)

Now for all the scoop on this fantastic book and the awesome Kinetic tour giveaway:

Synopsis:
Being strong is one thing. Being an unlimited source of power is quite another.

Genetically altered by the Organization, Annie Fox takes down criminals CIA-style with her luminary strength. With nothing to mend but her broken heart, she is relentlessly pursued by her boss Derek Lake. Just when Annie is about to give him a chance, her ex-husband unexpectedly comes out of hiding.

A wanted man, Nick Logan is a cold-hearted murderer who is considered enemy number one, and orders are clear: kill on contact. He is more powerful than ever and threatens the lives of those she holds most dear. His plan? Get his hands on Annie and use her Kinetic energy to destroy them all. When Annie finds herself with an opportunity to end him, she pauses, horrified by the scars covering the face she once loved. A split second that will cost her everything …

** Kinetic is a stand-alone novel. All books in series are part of the same world with the characters intertwined. **

S.K. Anthony is a writer, a reader and a make-stuff-up-er who lives in New York with her husband and toddler twins. She is a wine connoisseur, which just really means she knows she loves it, and a caffeine addict. When she isn’t busy with her family she finds herself being transported into the world of imagination. Well, either that or running away from spiders…she is convinced they are out to get her!

a Rafflecopter giveaway
Posted by Julie Flanders at 5:00 AM 9 comments: