I posted yesterday about a new project I'm starting, but the post seems to have disappeared during the Blogger service issues. As luck would have it, I don't have a saved copy of the post, so I'm just starting over again. I also want to say thank you to aahsome, L.G. Smith, D.U. Okonkwo, and Kendal. I did not get a chance to reply to your kind comments on the original post before it vanished.

Also thank you to Yvonne and Caren for your comments on the post that ended up being restored. I'm sorry I'm a little messed up here with duplicate posts!

I had really bad timing as far as the service disruption, as I had fallen behind on my blog visits and was happy to get caught up yesterday. From what I understand though, all of the comments written yesterday also disappeared, so I'm quite bummed about that. I hope to get caught up again over the weekend.

Anyway, back to the subject at hand.

I am starting a new project based on the John Steinbeck novel Travels With Charley. My project? Travels With Clancy. It's not exactly original, I know.

Unlike Steinbeck and his dog Charley, Clancy and I will not be traveling from one end of the United States to the other. Instead, we are going to explore the Midwest. Or at least our little corner of it.

My plan is for Clancy and me to visit parks, nature preserves, and other dog-friendly places here in Cincinnati and the surrounding area, and also to take day trips (as well as a few overnight ones) around Ohio, Kentucky, and Indiana. I hope to go to a new place each week, although I know weather and time constraints may be a factor. But, I'm hoping to be as consistent as possible, and to explore at least two places a month.

When I first had the idea for this project, I was simply looking for dog-friendly places for Clancy and me to visit over the summer. But as I thought more about it, the project took on a broader scope. For most of my adult life, I've wanted to go somewhere else and be someone else, with no clear idea of where or who that would be. In the past few years, I've made an effort to be more accepting of who and where I am, and to be more appreciative of the here and now. So this series became an opportunity to find and explore the beauty in my own backyard, and, at the same time, to feel more comfortable in my own skin.

I'm also working on learning to view things through the eyes of a writer, and to take the time to pay more attention to the details of what is going on around me. I think this will be a perfect chance to get more practice in that regard, and to view both the new and the familiar from the perspective of a writer.

I originally planned to make this a summer project, but I decided instead to do it for a year, so that I could capture the changing seasons and various holiday activities in the area. So, from now until the summer of 2012, Clancy and I will be traveling.

I've got my notebook and my camera, and Clancy is all set to be my co-pilot. He's so excited about the chance to go on so many car rides, he even smiled a bit for the camera. 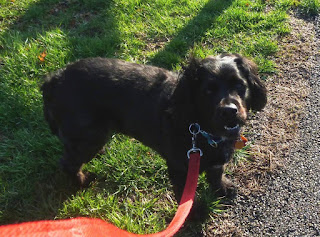 I'll be writing about our explorations, and sharing my observations of where we go and who we meet, in a blog series here. I hope you'll join Clancy and me on our travels!
Posted by Julie Flanders at 11:12 AM