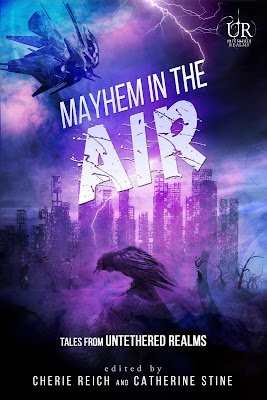 I'm super excited and proud to have a story included in the upcoming anthology from Untethered Realms, Mayhem In The Air. The anthology won't be out until Halloween but I couldn't wait to share about it even though the release is still a little ways off.

Here is the blurb as well as loglines for each story.

From Amazon bestselling and popular science fiction and fantasy authors comes Mayhem in the Air, a supernatural anthology of ten thrilling tales. Meet hot robots, hungry winds and the goddess of chaos. Explore alien planets, purgatorial realms, and a shocking place where people bury the living with their dead. Mayhem in the Air is the second, long-awaited story collection from the dynamic and inventive Untethered Realms group.

"A Strange Penitence" by Catherine Stine - A young artist pays a supernatural price when a drawing trip to North Carolina turns deadly.

"Mass Transit" by Graeme Ing - For Emily, mind over matter is not just a saying, but the gateway to her career among the largest starships built by man.

"A Tangled Weave" by River Fairchild - A TimePulse rips through the Great Tapestry of Life, leaving Earth’s history in a jumble, and Death and Chronos in a race to save the world yet again.

"Corrosive" by M. Pax - In a world ruined by pollutants, Bex sets off to establish a new homestead with her dreamy robotic man. Already farming her plot of land is another dreamy man with radical ideas, presenting new challenges as corrosive as the air.

"Saving Scrooge: A Short Story Prequel to the Saving Marley Series" by Gwen Gardner - Marley is sent from purgatory to save the soul of his old friend. Can he save his own in the bargain?

"The Silent Wind" by Christine Rains - A team of specialists must dispel a mysterious storm on an alien planet to prepare it for colonization. One by one the crew disappears until only a seasoned soldier remains. How can he battle a hungry wind that makes no noise?

"Paper Lanterns" by Cherie Reich: In order to keep his promise to his daughter, Mayor Alfred Merry must betray the woman he loves.

"Chaos. Hope. Love." by Misha Gerrick - Although Eris is the goddess of chaos, her life has fallen into a nice and comfortable routine. Until someone from her past shows up in her bookstore.

"Cardinal Sin" by Julie Flanders: Beleaguered hospital workers bury the living with the dead in the midst of a tuberculosis epidemic and a seething spirit vows vengeance from the skies.

"The Ark" by Cathrina Constantine -Plagued with memory flashes of fiery explosions and running for her life, Fallon emerges from a drugged stupor to find herself in an airborne Ark, and the earth below is a drowning wasteland.

I didn't write a story for the first UR anthology, Twisted Earths, and regretted that from the day it was released, so I'm really glad I was able to come up with something for this collection. I'm so grateful to be part of this group of writers!

In other news, today is the release day for Tara Tyler's latest, Simulation. Yay, Tara! Read on for all the scoop!

After Pop Travel, Geri convinced Cooper to move back to Atlanta, but for familiar reasons, things didn't work out... In Simulation, Geri is fighting her way back to full-fledged, solo agent status, but first has to deal with one more annoying sidekick on an equally annoying case. Meanwhile, Cooper takes his mind off Geri leaving him by throwing himself into his work, investigating an illegal clone android simulation operation. Sparks fly when Cooper and Geri's cases lead them down the same path. Of course Hasan wants to help them with their cases, and connives a plan to get them back together in the niddle of all the chaos!

In 2082, androids are an essential part of daily life. Some are helpful, some would make better toasters, and some are so human-like they're creepy. Back in Atlanta, Detective Cooper's latest client has him searching for her boyfriend who she thinks was replaced by a simulation, an illegal clone android. The guy also happens to be a popular new congressman.

As if the case wasn't frustrating enough, Cooper keeps crossing paths with his ex, FBI Agent Geri Harper who's looking for the same guy. As Cooper closes in, Geri is kidnapped. But when she resurfaces in Washington and goes on a killing spree, he knows it isn't her. Now under suspicion himself, Cooper must find the real Geri to prove her innocence, not to mention hunt down the powerful villain behind it all. Never a dull moment.

Tara Tyler writes sci fi and fantasy action-adventures from her little corner of the world in Ohio as she tries to keep up with her three boys and coach husband. Always making time to write, she sometimes puts off chores and lets laundry pile up... hence, she's also the Lazy Housewife, offering advice and tips to other gals out there trying to do it all without going crazy. She and her housewife friends blog at The Really Real Housewives of America.

And don't forget the Rafflecopter!