A visit from Jacqui Murray! 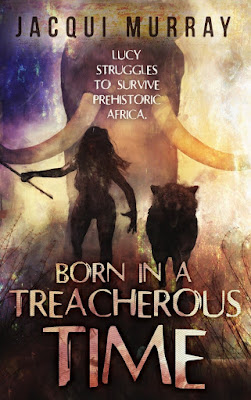 Today I'm participating in the blog hop to celebrate the launch of a great new release from Jacqui Murray, Born in a Treacherous Time. This is the first book in Jacqui's Man vs. Nature series.

Jacqui gave her tour hosts the opportunity to participate in a Q&A about her book, its genre, and its characters. I chose this question to learn more about Lucy, the main character of the story.


What one characteristic would you say allowed Lucy to survive in a world populated with Sabertooth Cats, violent volcanoes, and predatory species who liked to eat man?


Really, with our thin skin, dull teeth, and tiny claws (aka fingernails), Lucy had no right to survive against the thick-skinned mammoth or tearing claws of the great cats of that time. But we did. The biggest reason: Even then, Lucy was a problem solver. She faced crises and came up with solutions. Where most animals spent their time eating and sleeping, Lucy had time left over. This, she used to solve problems.


To me, that thoughtful approach to living, one no other animal exhibits, is why we came to rule the planet.

Thanks for the Q&A, Jacqui. I am intrigued by Lucy now!

Here's all the information on the book!

Title and author: Born in a Treacherous Time
Series: Book 1 in the Man vs. Nature series
Genre: Prehistoric fiction
Cover by: Damonza
Available at: Kindle


Born in the harsh world of East Africa 1.8 million years ago, where hunger, death, and predation are a normal part of daily life, Lucy and her band of early humans struggle to survive. It is a time in history when they are relentlessly annihilated by predators, nature, their own people, and the next iteration of man. To make it worse, Lucy’s band hates her. She is their leader’s new mate and they don’t understand her odd actions, don’t like her strange looks, and don’t trust her past. To survive, she cobbles together an unusual alliance with an orphaned child, a beleaguered protodog who’s lost his pack, and a man who was supposed to be dead.

Born in a Treacherous Time is prehistoric fiction written in the spirit of Jean Auel. Lucy is tenacious and inventive no matter the danger, unrelenting in her stubbornness to provide a future for her child, with a foresight you wouldn’t think existed in earliest man. You’ll close this book understanding why man not only survived our wild beginnings but thrived, ultimately to become who we are today.
This is a spin-off of To Hunt a Sub’s Lucy (the ancient female who mentored Kali Delamagente, the female protagonist).

Congratulations and Best Wishes on the release, Jacqui!!