Music Monday: You Better Think (about what you're doing when you're driving)

I am the world's worst singer, but that doesn't change the fact that I love to sing my heart out when no one is around to hear me. While some would-be rock stars sing in the shower, I've always loved singing in my car. Unfortunately, this has sometimes proven to be problematic, and I've learned to temper my enthusiasm for belting out tunes while behind the wheel. 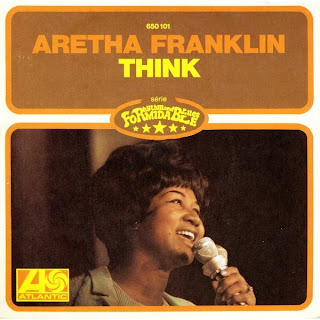 I love Aretha Franklin, and my favorite song to sing along with the Queen of Soul to is Think. I'd love to tell someone off the way Aretha does in this song but, as an introvert by nature, I don't really have it in me. Except when I'm in the car singing, of course.

One evening I was driving to my sister's house and was happily singing along to Aretha, when I suddenly heard a crunch on the passenger side of my car. I had been so wrapped up in telling some imaginary person who had wronged me that he better think, I'd managed to hit my sister's neighbor's mailbox.

I jumped out of my car, my heart beating so fast I thought I would pass out, and was beyond relieved to see that the mailbox didn't have a scratch on it. In fact, no one would ever have guessed that a moving car had just barreled into it. My car was a different story, however, as the side-view mirror was now hanging on by a thread.

While I was grateful the mailbox withstood my assault and I didn't have to pay to repair it, I could not escape the damage done to my pride. My family and friends have never let me forget this incident, and I still get teased about it. I still love the song though, although I now only sing along to it when I'm at home cleaning. I figure I can't do any damage with a mop or scrub brush.

You would think I would have already learned my lesson about singing and driving when this mailbox crash happened, as I had already had a singing mishap years before when I got my first (and only, knock on wood) speeding ticket.

When I first finished school I lived in a small town outside of Columbus, Ohio called Marysville. After driving home to Cincinnati for a weekend, I was driving back to Marysville on a Sunday night and, of course, listening to music. It was late and I had the country road to myself. Or so I thought.

I was listening to Free Fallin' by Tom Petty and really got into it, much like Tom Cruise's character did in this scene from Jerry Maguire. This incident happened a few years before Jerry Maguire even came out, and this scene totally cracked me up when I saw the movie. At least I wasn't the only one to get a little carried away with Free Fallin'.

Next thing I knew I heard a siren and saw flashing lights behind me, and I realized too late that I was not in fact the only car on the road. The officer asked me if I knew how fast I was going and I had to admit that I really didn't. I didn't think I should tell him that I was too wrapped up in my singing to notice. I wasn't that far over the speed limit, but far enough to get a ticket, and learn an expensive lesson.

After both of these mishaps I really did learn my lesson, and I've always been much more careful when driving. I was lucky the only things that were hurt by my silliness were my pride and my wallet. And in spite of these incidents, I really am a good driver, I swear it.

What about you? Do you like to belt out a tune when no one is listening? If so, have you ever been caught in an embarrassing moment as a result?

Posted by Julie Flanders at 5:41 AM