Blog the Change for Animals: A Sunrise Sanctuary Follow-Up 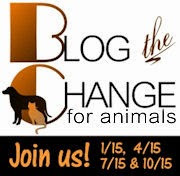 It's time for the quarterly Blog the Change for Animals bloghop and today I'm following up with the organization I wrote about on the Blog the Change homepage back in April. I didn't plan to write about Sunrise Sanctuary again but something happened back in June that made me feel like I simply had to once again spread the word about the wonderful people who make the sanctuary a home to nearly 200 abused, neglected, and unwanted farm animals.

On June 8, 2015 a truck carrying thousands of piglets crashed on a state route near Xenia, Ohio, which is about an hour away from my hometown of Cincinnati. I found the headline so disturbing that I couldn't stand to read any articles about the crash, but did see that hundreds of the pigs were killed immediately while the rest were rounded up to continue on their way to their ultimate destination, a slaughter house.

I would not have expected something heartwarming and life-affirming to come out of something so upsetting to read about, but that is exactly what has happened. As it turned out, one little pig survived the crash and wasn't rounded up with the others. Instead, he was found tangled in the wreckage by a Good Samaritan who managed to get the piglet to Sunrise Sanctuary.


Mindy Mallett, the founder of Sunrise, took the piglet under her wing and named him Nathan after Nathan Runkle, the founder of Mercy For Animals. Though traumatized and suffering from a respiratory illness that required hospitalization at the Ohio State University veterinary hospital, Nathan managed to thrive. He now charms everyone he meets.

The darling piglet has become a social media star and I can't deny that his pictures and updates are one of my favorite things that I see in my Facebook newsfeed. My sister and I plan to visit Sunrise next month and we can't wait to meet little Nathan.

When I first visited Sunrise back in April the farm reminded me of a real life Charlotte's Web or Babe. Now the little piglet named Nathan has only added to that feeling. Sunrise is definitely a place like no other and one that will bring a smile to anyone who visits it.

If you'd like to learn more about Sunrise Sanctuary and the amazing work they do for animals, visit their site or find them on Facebook.

If you're interested in joining the Blog the Change hop add your name to the list below and hop around to check out some of the other bloggers. :)