A Visit from Witch of the Cards author Catherine Stine 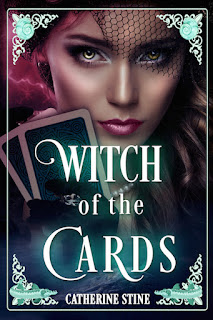 I'm happy to have Catherine Stine here today to talk about her latest book Witch of the Cards and its setting, the beach town of Asbury Park, New Jersey. She's also hosting a great giveaway to go with her release tour, so be sure to check out the rafflecopter at the bottom of this post. Welcome. Catherine!

The allure of creepy, ramshackle beach towns as settings for dark fantasy

What is it exactly that makes edgy beach towns the perfect setting for sinister fantasy and historical suspense? I’ve always been attracted to the dark side, and particularly to strange beach towns. So far, I’ve set two of my novels in them.

When I first moved to New York City after college and a stint out west, you couldn’t tear me away from the nefarious boardwalks of Coney Island. This was back before the arcade was renovated, back when the sideshow by the sea with its sword swallower and human pincushion were on full display. It was when a hungry, dirty capybara was caged in a box that read: Only $1 To See the Biggest Rat in the World! This poor critter was a plot point in Dorianna, my paranormal twist on Dorian Grey. And no surprise, I set Dorianna in Coney Island, and installed my sexiest villain ever, Wilson Warren, an agent of the devil disguised as a videographer who prowled the beaches, making girls into Internet sensations.

Fast-forward to my new novel Witch of the Cards, set in 1932, about Fiera, a sea witch who has a special talent with Tarot (and not just reading the cards). Of course, I set it in a shady beach town, in this case, Asbury Park, NJ. You see, I’ve been coming to this gentrifying beach town for years and know it well—in its sunny moods but also in its spooky, moody shades.

Around the turn of the century, and up until 1940, Asbury Park used to be the stomping grounds of the glitterati. There were grand concerts in the art deco Convention Center, and people dressed to the nines would stroll on the boardwalk at night. Then came the race riots of the 1960s and the economic crash, and the place fell into major disrepair. Its only remaining claim to fame was The Stone Pony, where Bruce Springsteen rocked into the limelight.

When I first ventured into the convention center, there was a hole in its roof that seagulls flew in and out of, and only one lonely saltwater taffy store on the boardwalk run by an ancient lady who seemed to have stepped out of a Stephen King novel. Of course in Witch of the Cards I made her into a fabulous, dangerous witch, who sold magical taffy. And I turned the paranormal museum on Cookwell Avenue, the main shopping lane, into a place to hold séances that often went horribly wrong. I installed an illegal speakeasy in the taffy store basement. In my novel, Witch of the Cards, even the ocean hides terrible secrets.

There’s something about the scent of saltwater and hotdogs, the splintered, salt-dried boardwalk and the scream of people hurtling down on the arcade rides that gets my blood charging and my imagination firing. What about you?

Here’s a snippet of a scene when Fiera and her date Peter went down to the basement speakeasy in the taffy store:

“Perhaps I was far too gone, but I didn’t care. Peter and I danced and danced. The room filled with the overflow from the convention hall dance—young lovers, bootlegger types with wide ties and cigars, older women with twinkling earrings and heavy bosoms, even a prostitute or two. I thought so anyway, because they wore way too much rouge and came alone to sit brazenly up at the bar with the gin rummies.
This time I couldn’t say whether or not I stepped on Mr. Dune’s polished wingtips. This time, he probably couldn’t be sure if he knocked his bony legs into mine. We had many more nips of absinthe, and I wolfed down another green-swirl taffy and before I knew it, I was leaning provocatively against Peter and laughing like a wild banshee.
I remember gaping up at him to see his black hair all disheveled and him mumbling indistinctly. And I, thinking that he was the most gorgeous human being I’d ever seen. I remember Dulcie grabbing one of my arms, and Peter grasping the other. I remember all of us howling at the crescent moon over the ocean, and the shocked sideways glance of the hotel proprietor as we all stumbled in.
I recall pulling out the Tarot he’d given me, and laying them out on the bedroom rug. I recall babbling at him—about a witch and a swindler and a boat—not necessarily in that order. I can still picture his expression of shocked surprise but not at what.
And I remember Peter’s lips branding my forehead—how could I ever forget that—while shocks of his lush black hair dangled deliciously on my burning cheeks. The last thing I recall before things went dark was kicking off my shoes.”

Fiera was born a sea witch with no inkling of her power. And now it might be too late.

Witch of the Cards is historical, supernatural romantic suspense set in 1932 on the Jersey shore. Twenty-two year-old Fiera has recently left the Brooklyn orphanage where she was raised, and works in Manhattan as a nanny. She gets a lucky break when her boss pays for her short vacation in Asbury Park. One evening, Fiera and her new friend Dulcie wander down the boardwalk and into Peter Dune’s Tarot & Séance, where they attend a card reading.

Fiera has always had an unsettling ability to know things before they happen and sense people’s hidden agendas. She longs to either find out the origin of her powers or else banish them because as is, they make her feel crazy. When, during the reading, her energies somehow bond with Peter Dune’s and form an undeniable ethereal force, a chain of revelations and dangerous events begin to unspool. For one, Fiera finds out she is a witch from a powerful sea clan, but that someone is out to stop her blossoming power forever. And though she is falling in love with Peter, he also has a secret side. He’s no card reader, but a private detective working to expose mediums. Despite this terrible betrayal, Fiera must make the choice to save Peter from a tragic Morro Cruise boat fire, or let him perish with his fellow investigators. Told in alternating viewpoints, we hear Fiera and Peter each struggle against their deep attraction. Secrets, lies, even murder, lace this dark fantasy.