I've written before about how my dog Clancy hates to walk, and seems to consider the activity a waste of his time. To him, his time is much better spent riding in the car.

Unfortunately though, Clancy has his own ideas about how things should go once we get into the car. He doesn't see himself as a mere passenger. In his mind, he is a co-pilot, and navigator. He remembers the routes to our main destinations, and becomes alarmed if I make a turn he is not expecting. He looks at me as if he is trying to alert me to my mistake, and get us back on the right course.

When I first got Clancy, I tried all sorts of doggie seat belts and harnesses to keep him safely in the back seat and let him just enjoy the ride. Clancy saw each one as an instrument of torture. At one point, I put him in a safety harness and drove off down the road. When I stopped at a light less than a half mile from my place, I glanced in the rear view mirror, and saw black paws and legs sticking up at odd angles and blocking the back window. In his desperate attempt to get out of the harness, Clancy had decided to stand on his head and put his back paws on the ceiling of the car. Surprisingly, this didn't work out as the Houdini-like escape Clancy had planned.

I had to pull over and get him out of the harness before he either caused me to drive off the road, or broke his own neck. After many similar experiences, I finally gave in and let him ride in the front seat where he is happy and can monitor my driving.

Now that March is here and Spring is around the corner, Clancy and I will be driving to lots of parks in the area, and I am also planning on making some day trips to hunt around for possible topics for regional magazine articles. I'm looking forward to exploring new destinations, and writing about the places Clancy and I visit.

Wherever we end up going, I know that when I grab my keys and pick up Clancy's leash, I can count on Clancy to be my travel buddy. He'll run to the car, call shotgun, and we'll be on our way. 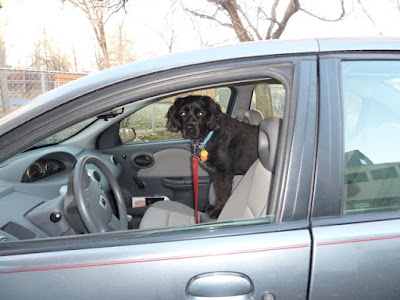 Posted by Julie Flanders at 6:31 AM

Email ThisBlogThis!Share to TwitterShare to FacebookShare to Pinterest
Labels: Clancy