In addition to my summer cleaning project at home, I have been helping my mother clean out the attic at my parents' place. This has been fun, as I've found boxes of "treasures" from my elementary, high school, and college days, and the two projects together have amounted to my own little version of "This Is Your Life."

Most of the finds have been humorous, such as my 80's prom dress. The dress was so hideous, my brother mistook it for a shower curtain when he carried the box containing the dress out of the attic. I remember I was trying to go for a Molly Ringwald "Pretty In Pink" look with the dress, but it didn't work out too well, as this taffeta and lace horror with pink and white polka dots did in fact look like a very ugly shower curtain. We got a good laugh out of it, as we did with the other dresses in the box, a frightening collection of bridesmaid and prom dresses that my sisters and I had worn over the years. One of them was uglier than the next, ranging from a filmy lavender number with cap sleeves to a red and white polka dot travesty that rivaled my own polka dot embarrassment. Apparently, we liked polka dots a lot back then.

My favorite find was in the box from my elementary school years. It was the first story I ever wrote, and I had completely forgotten about it. But, as soon as I saw it, I remembered being so proud of it at the time, and thrilled that I won second place in the story contest for our grade.

The book is called "It's A Dogworld After All," and, for some reason, I covered it in pink (again with the pink!) floral wallpaper. 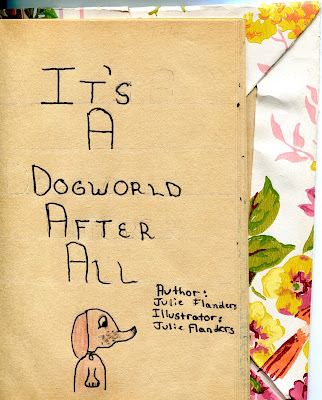 It's about a group of dogs sailing around the world alone in the far off year of 2001. 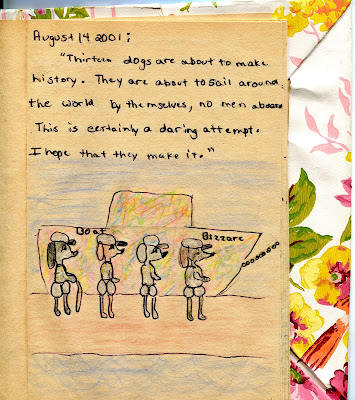 At one point in the story, the dogs have a New Year's Eve party to usher in 2002. 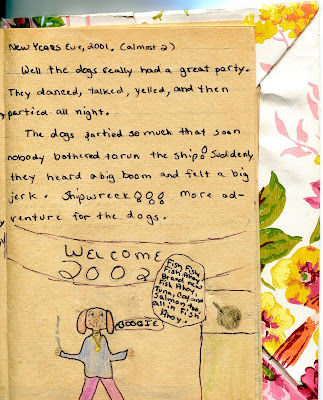 I couldn't help but laugh that even though the party was supposed to be in 2001, I drew the partying dog as if he were at a 70s disco, and even gave him a garish gold chain.  I guess it never occurred to me back then that styles change. I also couldn't help but notice that my party guy has a cigarette in his paw. Again, times sure do change. I'm fairly certain a kid today would not draw it that way.

It was a lot of fun to see this book again, and it made me smile to realize that even back then, I wanted to write about dogs and animals. It almost seemed like a sign that even though I've definitely taken the long way around, I really am on the right track now.

We're supposed to have another hot and sticky weekend ahead, and I'm planning on another round of cleaning so I can be indoors and in the air conditioning. I'm hoping I will come upon some more fun discoveries from my little walk down memory lane.

I hope everyone has a great weekend! :)
Posted by Julie Flanders at 9:53 AM

Email ThisBlogThis!Share to TwitterShare to FacebookShare to Pinterest
Labels: dogs, It's A Dogworld After All, Writing