In spite of what you might think, Clancy and I did not head to France and the palace of Louis XIV for our latest travels. Although it sure would have been nice if we had! But, Clancy's never been on a plane and we don't have that kind of time or money right now anyway, so we stayed much closer to home, and drove to Versailles, Indiana.

Versailles is about an hour west of Cincinnati, and traces its history back to 1818, when it was established as the county seat of Ripley County. County Commissioner John DePauw named the new town after his native city in France. But as the years passed, the French pronunciation of the name was lost, and the town is now known as "VerSALES." Somehow, that Americanized pronunciation doesn't have quite the same panache.

At any rate, Clancy and I had heard good things about the park in Versailles, so we hopped in the car and headed west on State Route 50. We were expecting a peaceful drive on a sunny morning, but that didn't turn out to be the case, as I was cut off and nearly driven off the road by a guy driving a pickup and towing some kind of huge recycling dumpster behind him. While my hands shook and my heart pounded as if it would leap right out of my chest, he drove on, completely oblivious to the fact that he had nearly sent Clancy and me to the great beyond.

We probably should have taken that as our cue to just turn around and head back home.

Instead, we continued on, and quickly came to the Indiana state line. I have always found the drive across the border to be kind of funny on Route 50, as it is a tad seedy. On the Ohio side, there is a motel that has been there for as long as I can remember, and looks like it hasn't been remodeled since the 1950s. It's simply called "State Line Motel," and I would be willing to bet that the rooms are rented out by the hour. I also wouldn't be the least bit surprised to see Norman Bates and his stuffed birds behind the desk if I went inside.

The sale of fireworks is a big business around the border, as fireworks are technically illegal in Ohio, so Ohio residents who want to purchase fireworks for the 4th of July or other summer holidays have to travel to Indiana or Kentucky. As a result, Route 50 is lined with billboards advertising fireworks dealers. The signs shout "POW!" and "KABOOM!" in huge red and yellow letters, as if they are straight out of the old Batman television show. I can't help but find the signs funny, even though they are not exactly high-class.

About a half an hour after crossing into Indiana and leaving the garish fireworks signs behind, Clancy and I made it to Versailles State Park. As we drove in, we came to the Versailles Lake, and it was immediately clear that this was indeed a peaceful and lovely park. 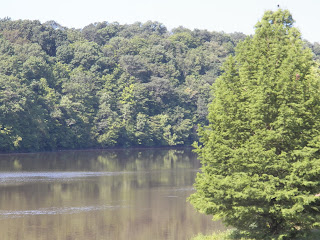 The problem was that it was too peaceful. Because there wasn't anyone else there. Our only companions were these guys. 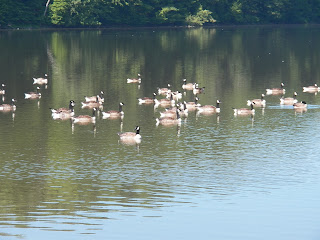 I'm normally not one to complain about peace and quiet, but this was too quiet. To the point of being eerie. Clancy and I walked around, and saw a huge pool with several water slides, numerous picnic shelters and tables, and a variety of playground equipment. But there wasn't a single soul to be seen. I felt like I was in some post-apocalyptic movie, and Clancy and I were wandering around looking for other survivors.

Even the boats along the lake were empty and unused. 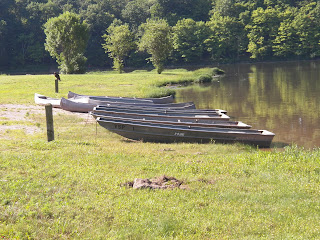 We found a trail across from the lake that looked like the start of a great hike. 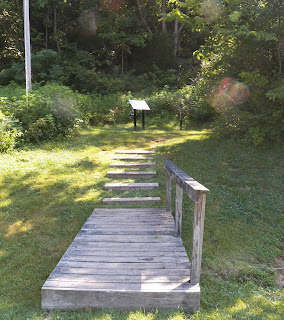 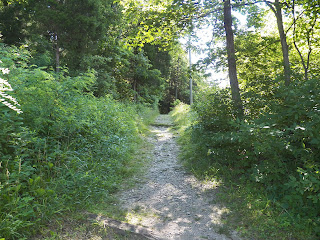 But it became obvious very quickly that this trail was heading deep into the woods. 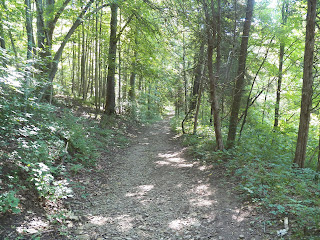 Since I couldn't see another human being within shouting distance, and I had lost my cell signal, walking on didn't seem like a very wise decision. Clancy can be intimidating when he views something or someone as threatening, but that really wasn't enough to reassure me. We turned around and headed back out.

The more we walked around, the more my imagination went into overdrive. By the time we got back to the car, I really had the creeps. And our duck friends were still our only companions.

We got in the car and drove out, but I did stop the car and get out again in order to take a picture of this covered bridge from the 1850s. I love old covered bridges like this, as I think there is something so romantic about them. I would imagine the red of this bridge is beautiful in the winter up against a snow-filled white backdrop. 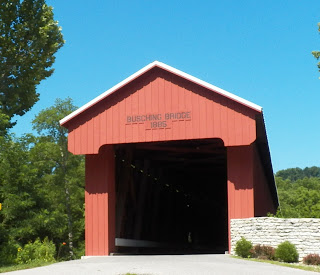 With that,Clancy and I left Versailles and headed back to Ohio. Versailles is a beautiful park, and I've no doubt that on the weekends it is alive with children playing and swimming, families picnicking, dogs barking, and walkers hiking. But on this particular weekday morning, the place was not for me.

So this trip was a swing and a miss, but I knew we couldn't have a successful outing every time. We're staying on our side of the state line for our upcoming travels, and keeping our fingers and paws crossed that we have some human companionship!
Posted by Julie Flanders at 7:51 AM