Clancy and I had a guest along for the ride on our latest travels, as my brother was in town for a visit. So the three of us got up early Saturday morning and headed to Withrow Nature Preserve. Clancy was surprised to have company, but he always enjoys having another passenger in the car with us whenever we go somewhere.

Withrow is part of the Hamilton County Park District, and is located on the eastern side of Cincinnati. I'd read good things about the hiking trails there, so it seemed like a great place for an early morning walk.

The parking lot was nearly empty when we arrived at the preserve, and we were able to get a spot right near the start of the Trout Lily Trail. 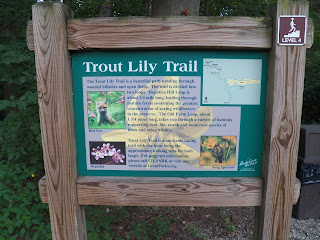 According to the sign, red foxes are a common sight on the trails, and I can't deny I was hoping to get a glimpse of one. But there were no foxes to be seen, and maybe that was for the best. I have no idea how Clancy would react to a fox, and it's probably better not to find out how a fox would react to him.

All was well as far as Clancy was concerned though, as he met a new friend, an adorable and friendly chocolate lab, at the start of the trail. There's nothing Clancy loves more than interacting with dogs. The lab seemed just as happy to make Clancy's acquaintance, so they had a good time saying hello and checking each other out.

Here we are at the start of the trail into the woods. 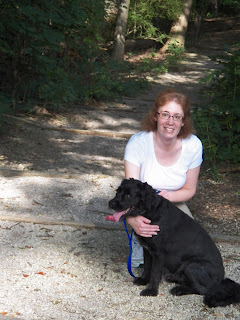 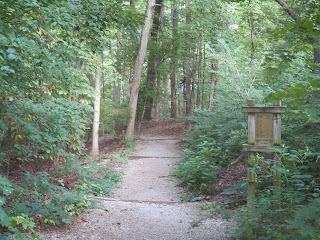 We had hoped to take the Hepatica Hill Loop trail, which is the longer and more scenic route, but unfortunately the loop was closed due to landslides caused by the heavy rains we had back in the spring. So we just stayed on the shorter trail, which was a nice walk, but didn't really have any noteworthy scenery.

At the end of the trail, we came to a solitary bench nestled in the middle of a lush and green clearing. The bench offered a perfect view through the trees to the Ohio River below. 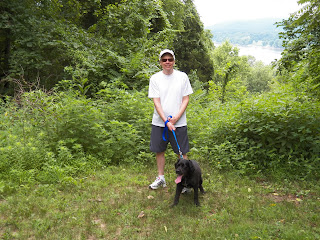 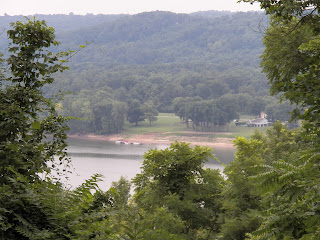 Clancy's labrador pal was just leaving the clearing as we arrived, so the two of them enjoyed another quick round of doggie bonding. After saying goodbye to the lab and his family, my brother and I sat on the bench and had a nice chat, while Clancy checked out the scents and took a well-deserved rest. When we were all ready to move on, we turned around and headed out of the clearing. 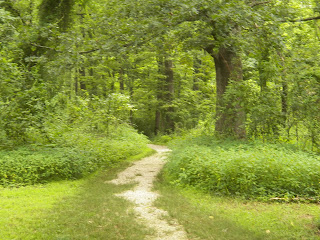 Back at the parking area, we came upon the Highwood Lodge, which is used for weddings. 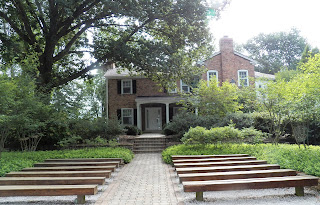 I can imagine it is a very pretty setting for weddings, as the benches can be covered with white cloth, and the ceremonies are performed in front of this white lattice backdrop. 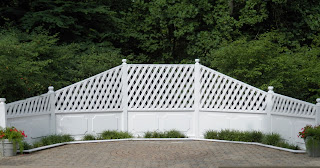 According to a sign at the park entrance, a wedding was scheduled for that afternoon, so I hope the bride and groom enjoyed their day.


Off to the side of the lodge, there is a gazebo at the edge of the woods. I'm sure the gazebo is very popular during the weddings, as it provides a wonderful backdrop for pictures. 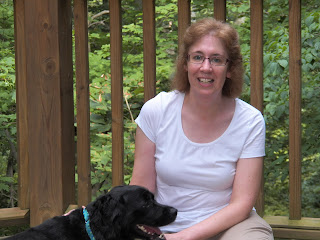 Throughout the morning, Clancy fussed whenever my brother held his leash. This picture was no exception, as he stared at me and whined as if I was abandoning him just by walking fifteen feet away to take a picture. 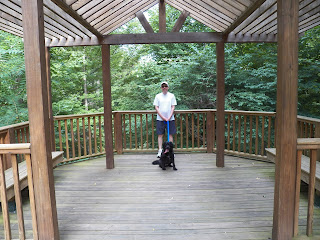 It was clear he'd had enough of pictures, and was ready to get back in the car. The humidity was starting to build up anyway, so we were all fine with taking our leave.

Clancy and I enjoyed having a guest with us on our travels, and the visit to Withrow Preserve turned out to be a perfect way to spend a Saturday morning.
Posted by Julie Flanders at 11:02 AM