An Alaskan Adventure with Yolanda Renee

Today I'm very excited to be hosting Yolanda Renee, author of Murder, Madness, & Love (available next week!) and Memories of Murder, which will be published in October. When I met Yolanda I was very interested to hear about her time in Alaska since that is the setting for my novel Polar Night. So when I signed up to be part of her blog tour it was a no-brainer for me to ask her to share some of her Alaskan experiences here on my site.

Before I turn things over to Yolanda, I just want to say that I am also excited to be featured on her site today. You can read Yolanda's interview with me on her blog Defending the Pen.

Now on to the Alaskan adventures!

Julie has agreed to host me on her blog today, and has asked that I speak of my Alaskan Adventures, the inspiration for much of my writing. Thank you Julie, I love nothing more than talking about Alaska and my experiences, just don't tell my family or their eye rolls will make you all dizzy!

I went to Alaska on vacation but fell in love, with the state, and stayed for 4 years. The boyfriend I went there to visit, well, we just didn't work as a couple. I knew the first few minutes after my arrival that I never wanted to leave this amazing place, and if I have one regret, it's that I did leave. Even though I moved to Washington State, a place that ran a close second to Alaska for an adventure seeker, I still hope to return, and make Alaska my writing home.

That first year I lived near Ester, just outside of Fairbanks and close to the University of Alaska. I worked for a trucking company as a payroll clerk and wrote weekly checks to drivers that equaled ¼ of my paycheck for an entire year. I was mistaken for a prostitute on the plane ride to Fairbanks and refused to wear a dress for almost two years because of it. I worked as an Assistant Field Engineer on the pipeline corridor from Prudhoe Bay to Valdez and eventually settled in downtown Anchorage where I worked for the native Corporation that built the Sheraton Anchorage Hotel.

I hiked the Alaskan Range and the Brooks Range, and learned all about survival in the wilderness and the cold despite being a cheechako (a newcomer, unaware and totally unafraid). You learn fast when faced with a crisis. I still suffer in the cold from frostbite to my fingers. Damage that occurred when I had to splice the wires to my engine-heater at 50 below, but I will always prefer the cold to the heat. I spent more money on bug-off, and hiking boots, than perfume or high heels. That first summer I hitchhiked, safely with a friend, until I could convince a bank I would not disappear after the termination dust (snow) hit the foothills in September.

I've been stranded on a mountaintop at 30 below, shivered through a night (alone) under a mountain of blankets after exposure to the cold – hyperthermia. I learned that the water in a gas tank can freeze and clog not only the gas line but also the carburetor, as well as how to repair it myself. I've stood on ice bubbles ten feet tall and I've eaten grayling direct from mountain stream to skillet and nothing since, has ever tasted that good. I've helicoptered into to a mining camp and listened to the miner's stories of survival while drinking coffee and eating sourdough bread. And in one evening I saw 9 grizzlies, after a spring of hiking the range and not seeing anything but tracks, thank god, I was in a pickup truck at the time of those sightings.

I've been truly blessed to have had such awesome experiences and have drawn from that to create my suspenseful romance set in Alaska, and Washington states. Murder, Madness & Love to be re-released this month, and Memories of Murder to be released October 4, 2013. The first two books in the Detective Quaid trilogy with a third, Obsession to Murder due out in 2014.

Thank you Julie, for allowing me to visit your blog and talk of my Alaskan adventures and my books!

Learn more about Renee and her books by following these links: 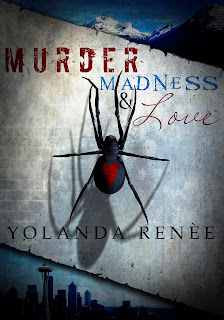 After a gritty detective becomes involved with a beautiful widow suspected of murder, rumor and obsession obstruct his quest for justice.

Sunlight blazes on an empty canvas.

Arctic winds gather snowflakes on a frosty window ledge as a statuesque form appears. She moves past a table littered with papers. Headlines splash news of murder, but it's the photo of another young woman with features mirroring her own that draws her attention.

A different headline peeks from underneath the Anchorage Times.

Graphic images swirl through her head and a tear rolls down her cheek. She drifts toward an easel and a trembling hand dips a sable brush into a palette of paint.

The Westminster doorbell chimes. The brush slips and blood-red paint stains the floor.

Will he arrest her this time?

All fingers point to her guilt.

But, is she guilty of this cunning plot? Or, just a victim of circumstantial evidence?

Hers skips a beat. 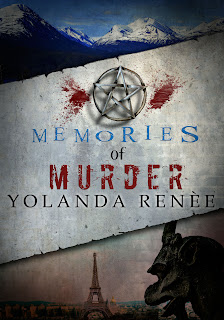 World damnation is a psychotic man’s goal, but two obstacles stand in his way, greed and a dedicated detective.

Decades ago, the seeds were planted …

Today, dark, fathomless eyes rake the image before him. One final task and the transformation is complete. Steady fingers screw intricately carved horns on each side of a stiff brow, and a gargoyle suitable for Notre Dame scowls from the smokey mirror in satisfaction.
A jagged smile rips through his smooth, hairless face, and inked, reptilian scales caress his naked body.

A laugh of hideous resonance emanates from his gut as the demons of hell welcome Lucifer into their fold.

In a dungeon-like chamber, his Lilith awaits. The kidnapped daughter of a nun, groomed to fit the final piece in the complex puzzle for world domination. Will Lucifer marry his bride, on the summer solstice?

Only two things stand in his way ...