An Excerpt from Trouble By Any Other Name by Lori McLaughlin

If you've been spending any time in the blogosphere the past few weeks you've probably seen Lori McLaughlin hopping around on her blog tour for her latest release, Trouble By Any Other Name. I'm thrilled to be a stop on that busy tour today and to share an excerpt from the book. Welcome, Lori! 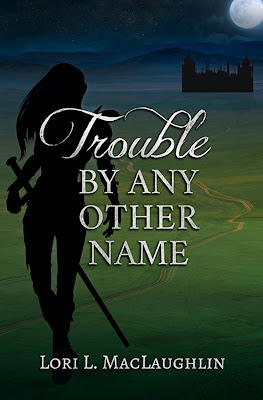 Thanks very much, Julie, for having me over!

Tara descended the stairs to the lower landing where the others had collected, their searching as fruitless as hers. "And there's no way down," she muttered, peering over the landing's edge. The cavern dropped away, funneling downward into a darkness so thick and absolute it reminded her of the crushing void that led to her dream dungeon. She tensed, her throat constricting. Had something moved down there? Fleeting shadows skittered past the edges of her vision, but she couldn't tell if they were real or if her eyes were playing tricks on her. She leaned out a bit farther. If she could just get a better look...

"Hey!" Blackie's arm blocked her forward progress just as Jovan's hands gripped her shoulders and pulled her back from the edge. "Balls, woman, what are you trying to do?" Blackie demanded. "We're not jumping, if that's what you think."

She shook her head. "I think there's something down there, but I can't quite see it." She felt Jovan's heart hammering against her back as he held her to him. She hadn't meant to scare them. She just needed to see. "I want one more look, so if you hold onto me," she said over her shoulder to Jovan, "I'll —" Freezing cold engulfed her as if she'd suddenly plunged into a frigid lake. Whatever had been in the cavern depths was now up here — with them.

"Everyone back in the chamber!" She spun, trying to catch sight of the shadowy force whirling through the cavern.

"I don't see anything," Blackie said.

He and the others backed into the chamber, crowding the doorway.

Jovan circled with Tara, his back to hers.

She touched his arm. "Jovan —"

She cursed to herself, afraid for him, yet glad of his nearness. She took a deep breath to clear her mind, and suddenly she knew what dwelled in the cavern. Ravnaul's magic. She gasped as the magic surrounded them, flowing through the air like a live thing. She could see it now — a dark red mist that whispered around her in sinuous clouds, filling the cavern with malevolence. Diurkruna, the magic of blood and death. She shoved Jovan away as the mist swirled around her legs and twisted up around her body in ever-tightening coils, squeezing the life out of her like a giant rock serpent crushing its prey.

"No!" she choked out, fighting the red mist. "Stay back!"

"What is that?" Blackie stopped beside Jovan, the others piling up behind them.

"I don't know," she heard Jovan say as she braced herself against the strangling pressure. He took another step toward her. "Let me help you!"

"No!" she croaked. "This is... my... battle." She gathered her power. A scream tore from her throat as her own magic blazed forth, burning the red mist away with a fiery bluish incandescence. She thrust her arms out to the side. Brilliant light spread throughout the cavern, driving back the dark magic.

Title: Trouble By Any Other Name

Sequel to: Lady, Thy Name Is Trouble

Tara Triannon is no stranger to trouble. She's yet to find an enemy her skill with a sword couldn't dispatch. But how can she fight one that attacks through her dreams?

With her nightmares worsening, Tara seeks answers but finds only more questions. Then her sister, Laraina, reveals a stunning secret that forces Tara to go to the one place Tara's sworn never to return to. Her troubles multiply when Jovan Trevillion, the secretive soldier of fortune who stole her heart, is mentally tortured by an ancient Being intent on bending him to its will. And worst of all, the Butcher — the terrifying wolf-like assassin she thought she'd killed — survived their duel and is hunting her again.

Hounded by enemies, Tara sets out on a harrowing quest to discover the true nature of who she is, to come to grips with the new volatility of her magic, and to defeat the evil locked in a centuries-old trap that will stop at nothing to control her magic and escape through her nightmares. 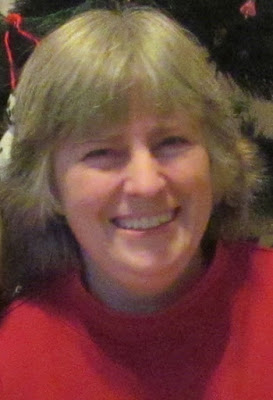 Lori L. MacLaughlin traces her love of fantasy adventure to Tolkien and Terry Brooks, finding The Lord of the Rings and The Sword of Shannara particularly inspirational. She's been writing stories in her head since she was old enough to run wild through the forests on the farm on which she grew up.

When she's not writing (or working), she can be found curled up somewhere dreaming up more story ideas, taking long walks in the countryside, or spending time with her kids. She lives with her family in northern Vermont.

You can find her here:

Email ThisBlogThis!Share to TwitterShare to FacebookShare to Pinterest
Labels: Books, Trouble By Any Other Name. Lori McLaughlin