Animal Stories: A Visit to Red Wolf Wildlife Sanctuary, plus a #Free eBook 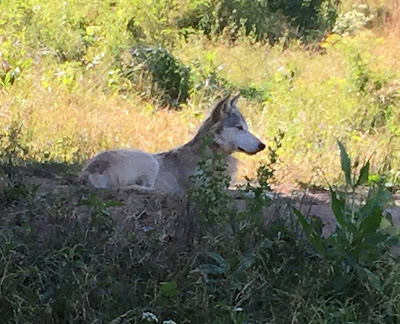 I'm continuing my series about some of the animal rescues I've come in contact with over the years by sharing my recent visit to the Red Wolf Wildlife Sanctuary and Rehabilitation Center in Rising Sun, Indiana. I visited Red Wolf last week and spent an amazing and fun two+ hours with the center's director Paul Strasser.

The mission of Red Wolf is the preservation of North American wildlife and the conservation of their habitat. Mr. Strasser owns more than 450 acres of land in Rising Sun and has made this land a haven for animals who have been abused, injured, or orphaned. Many of the Red Wolf animals were bought through the exotic pet trade and then abandoned when they were no longer cuddly babies. The sanctuary gives them the opportunity to live their lives in a setting as close to their real habitats as possible.

One such animal is this coyote pup, who was recently left at Red Wolf after his owners belatedly realized that wild animals are not pets.

Some of the first animals I met when I arrived at Red Wolf were these adorable orphaned fawns. 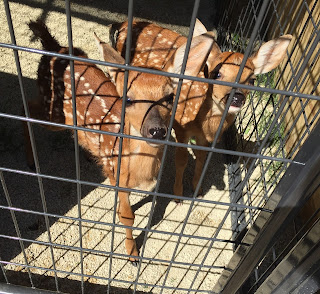 Like many of the animals who come through Red Wolf, the fawns will be released back into the wild as soon as they are able to care for themselves. In their case, the "wild" will likely just be Red Wolf itself, as so many deer choose to make the sanctuary grounds their home.

Other animals who, for various reasons, are unable to be released live out their lives in the peace and tranquility of the sanctuary.

Mr. Strasser provides a home for four bears, three of whom were bought as pets when they were cubs. Of course, bears don't remain cubs and the people involved discovered that it wasn't the best idea to have an adult bear in an apartment.  The fourth bear, a 700 lb guy named Tecumseh, was caged in the parking lot of an apple orchard for years as a marketing gimmick.

It made me happy to see that these bears who got such rough starts in life now have ranges like this to roam around in, along with enclosures to enter as they please when they want to lay down in front of a fan and cool off! When I met Tecumseh, he was happily settled in front of a fan and had no intention of leaving his spot. 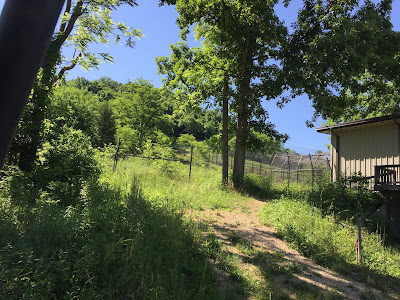 Wolves make up the majority of the sanctuary's residents, and I got to meet this handsome yearling when he came to his fence to smile and say hello. 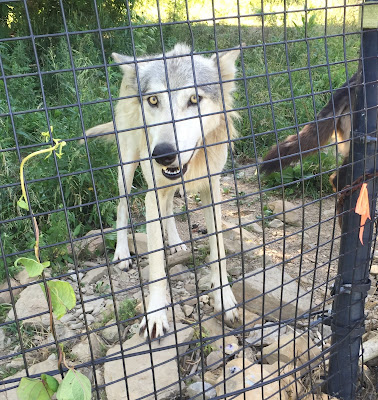 Not all of the residents of Red Wolf are wild. This is D.D., which stands for dumped dog. D.D. was dumped at Red Wolf with a gun shot wound and signs of other abuse and neglect. As you can see, she is thriving today. 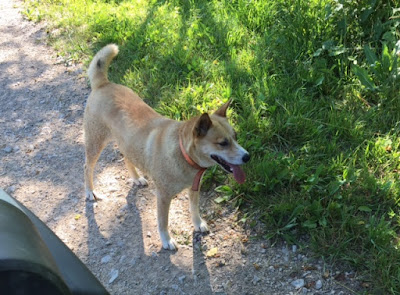 D.D. visited many of the wolves and I loved to see her and the younger wolves running the fences with each other just like domestic dog neighbors do. It was so cute!

D.D. seemed to consider herself my tour guide and you can see her walking quite a bit ahead of our ATV below. 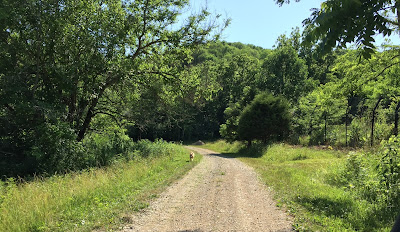 Red Wolf was one of my favorite places that I've visited and I wouldn't hesitate to return. It's a beautiful and peaceful place that made me smile throughout my visit. Mr. Strasser is an excellent host and tour guide, and so knowledgeable about animal behavior that I felt like I learned more from him than I ever did in biology class. He's passionate about his mission and that shows in all he does. I'm thrilled that so many animals have found such a great place to live under his care.

To learn more about Red Wolf, visit their site here.

Also, I was over at Untethered Realms yesterday talking about my book Polar Day and its relation to the summer solstice. To celebrate the solstice I thought I'd give away the Polar Night & Polar Day prequel The Turnagain Arm free on Amazon this week. If you haven't read it and would like to check it out, you can grab it for free here.