T is for the T Cats

When I graduated from college and got my first apartment, one of my main goals was to get a pet of my own. I ended up getting two, as a friend of my brother's who worked for the Humane Society rescued a mother cat and her kittens, who had been born on the street. She asked me if I would like two of the kittens, and I jumped at the chance.

They were two tabby cats, and I named them Tigger and Thomas. A friend dubbed them "the T cats." For the next twelve years, the two of them were my little buddies and constant companions, with me through moves, job changes, going back to school, more moves, more job changes, and all the general ups and downs of life.

When Tigger was 12 years old, he was diagnosed with a heart problem. His body deteriorated quickly, and within a few months, the vet also found a cancerous tumor in his abdomen. It was clear there was nothing to do for him but put him to sleep. I stayed with him when the vet put him down, and I cried my eyes out. I knew it had to be done as I couldn't allow him to suffer, but that didn't make the decision any easier.

Thomas was diagnosed with diabetes when he was 10 years old, and for the next 5 years, I learned more about treating feline diabetes than I ever wanted to know. I almost felt as if I could be a vet tech myself. Thomas was at the vet so much, he became a favorite patient of the staff there, and almost like Norm on Cheers. When Thomas and I would walk in the door, the receptionists and technicians and veterinarians would turn and yell "Thomas!" Everybody there knew his name.

He managed very well and lasted longer than anyone expected when he was first diagnosed, but when he was 15, the disease had taken its toll and his body started to shut down. Once again I found myself putting a beloved pet to sleep, and it wasn't any easier the second time around.

While Thomas outlived Tigger by 3 years, I still always think of the two of them together, and it's impossible to think of one without the other. They were a package deal.

For 12 years, they were inseparable, and only apart when one had to go to the vet and the other got to stay home. They were my T Cats and, at least in my heart, they're together again, where I know they'll always remain. 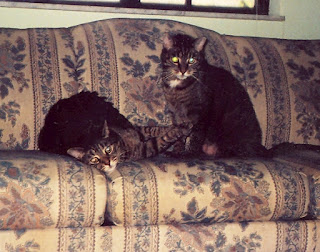 Email ThisBlogThis!Share to TwitterShare to FacebookShare to Pinterest
Labels: A-Z in April, Cats, T is for the T Cats