After hitting some roadblocks in August, Clancy and I decided to get our Travels project back on track again with a visit to Long Branch Farm & Trails in Goshen, Ohio. While we did make the trip, I'm not sure I would say that our experience got us back on track.

My sister decided to accompany us to the Farm, so we had a visitor along for the ride again. Long Branch is part of the Cincinnati Nature Center, and is open only to members. As I had joined CNC back when Clancy and I visited Rowe Woods, I was all set and had my membership and guest cards ready to go. We set off early Sunday morning, and headed for Goshen.

Long Branch is about an hour's drive from where I live, so we were prepared for a fairly long ride. But, that ride turned out to be a great deal longer than we planned, as I missed the turnoff to Long Branch and ended up at least 30 minutes out of our way, on a country road that seemed to be leading nowhere. By the time we realized we had missed the turn, there was nowhere to turn around for what felt like 100 miles. Even Clancy the car-ride junkie got sick of the drive, and stretched out on the back seat with an irritated harrumph. In addition, the winding country road made my sister start to feel car sick. It wasn't a pleasant morning drive, to put it mildly.

At long last, we finally reached the Farm, and set off to walk on the trails, anxious to put the irritation of the drive behind us. We chose the Salamander trail, which was a 1.6 mile loop around the farm. As was the case at Rowe Woods, the trail was clearly marked. Thank goodness, as I'd already been lost enough for one day. 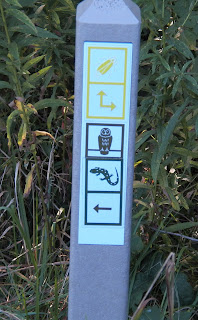 The trail was quiet and quite peaceful, and Clancy and I enjoyed stopping to sit for a picture on some old logs. As is often the case, Clancy refused to look at the camera. 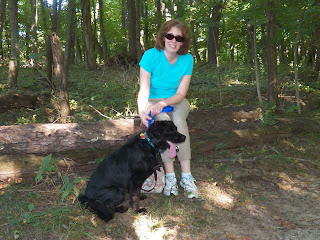 He had no problem looking towards the camera a few moments later, though, when we reached the trail overlook, and my sister held his leash while I look a picture. As he had when my brother was with us, Clancy once again acted like a lunatic, crying and carrying on as if he was frantic to get to me, even though I was only standing a few feet away. He's known my sister since the day he came to live with me, so his behavior was truly ridiculous. 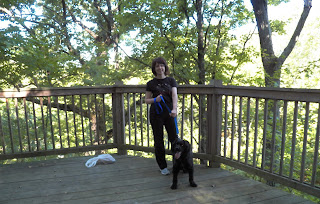 The overlook was a pretty scene though, and we were much higher up than we would have guessed while walking towards it. 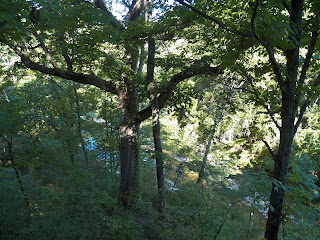 After leaving the overlook area, we hiked down a fairly steep descent, and ended up in a creek bed that was filled with more rocks than water. 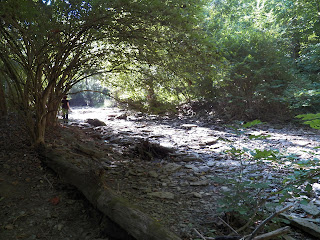 We climbed around on the rocks, which, based on my limited memory of high school geology, I would say were probably shale. I can't even call this an educated guess though, as my memory is so limited in that area that it's more like a shot in the dark. 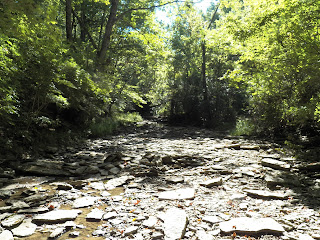 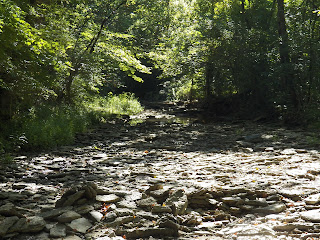 We hopped around on the rocks, then made our way back up from the creek bed, where we found our friend the Salamander. We followed him back around the loop to the Farm entrance.

Unfortunately, our drive to the Farm had been so muddled that we couldn't remember which way to turn to get back to the main road. We debated, and I'm sure it's no surprise that I chose the wrong way. Fortunately, it didn't take us long to realize this, but we did spend more time than I would have liked on yet another windy country road with no street signs or markers to be seen.

This debacle is probably enough to get me to finally buy a GPS. I don't know why I've resisted it, as I am among the most directionally-impaired people on the planet and a GPS seems like it was made just for me. I think I am finally going to have to break down and buy one before I head out on any more country roads.

Long Branch is a nice place for a quiet and undisturbed walk, but I can't say I will have fond memories of this trip. With a new month and a new season in front of us, I'm hoping Clancy and I can really get back on track for the next installment of our Travels. I think a trip to Best Buy is in order so I can get that GPS installed before we venture out again.
Posted by Julie Flanders at 10:59 AM