Clancy and I took advantage of absolutely perfect weather to get back to our Travels last Saturday morning. Thanks to a recommendation from Amalie at Waxing Lackadaisical, we headed to the Serpent Mound, which is just outside the town of Peebles in Adams County, Ohio.

The mound is about 80 miles east of Cincinnati, and the majority of the drive is along Ohio State Route 32. As it was such a clear and beautiful morning, Clancy and I really enjoyed the drive through the rural counties of Clermont, Brown, and Adams. I love the convenience and speed of expressways, but I couldn't help but think while driving along 32 that if I had all the time in the world, driving along old state routes would be the way to really see the country.

We saw some funny billboards for upcoming events, such as an Old West Festival that looked like it would fit perfectly in an old-fashioned cowboy movie. We also passed a turn-off with a sign pointing to "The Land of the Singing Coyote." Clancy really wanted to stop there, but he was over-ruled.

As we got into Adams County, we saw street signs for Tranquility Pike and Unity Road. Apparently the people in the area are a happy and peaceful bunch. I considered going on Tranquility Pike to see if it lived up to its name, but I decided to keep going to the mound instead. 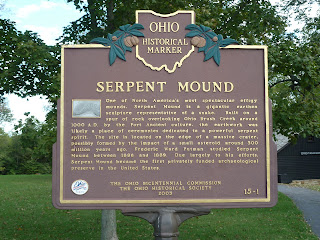 The Serpent Mound is the largest serpent effigy in the United States, and it is a National Historic Landmark. According to the Visitor's Guide that I received at the Museum, which is run by the Arc of Appalachia Preserve System, it is also the largest surviving example of a prehistoric effigy mound in the world. 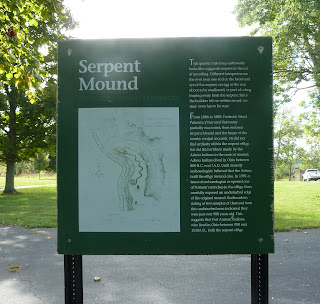 The mound sits on the edge of a cliff overlooking the Brush Creek Valley, and it is in the shape of an uncoiling serpent. There is a paved trail that goes along the length of the snake, so Clancy and I set off along that trail when we got to the site.

We couldn't have asked for a better morning to be there, as the sky was so clear and blue that the moon was still visible in the sky even though the sun had been up for a few hours. 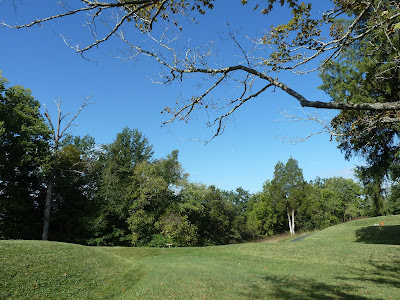 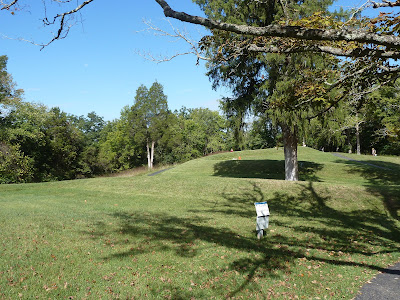 As we we walked along the trail, I was intrigued by various signs marking the Winter Solstice sunrise, the Equinox sunrise, moonrise, etc. 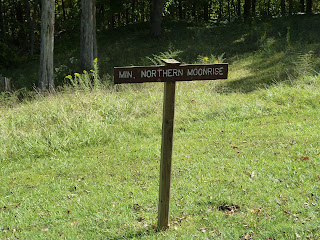 The sign at the head of the serpent notes that it is aligned with the Summer Solstice sunset. 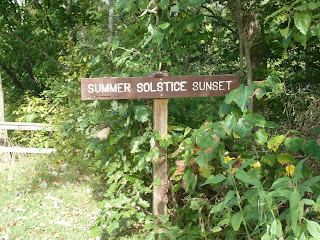 The original purpose of the Serpent Mound is unknown, but its alignment with the cycles of the sun suggests a possible connection to ancient sacred traditions. It was so fascinating to me to try and imagine the mound builders lining up the serpent to such exact points. According to carbon dating, the mound was likely built around the year 1070 by the Fort Ancient culture, but its origins will always be shrouded in mystery.

As the Visitor's Guide put it, "mystery, rather than certainty, remains this site's greatest gift to present generations." I liked that!

There's no question that there is a palpable sense of mystery surrounding the mound. For one thing, I can't begin to imagine how it was ever built. At times, it is a good three feet tall, and it is perfectly shaped and rounded. Its width ranges from three feet to twenty feet. 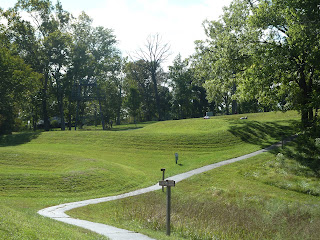 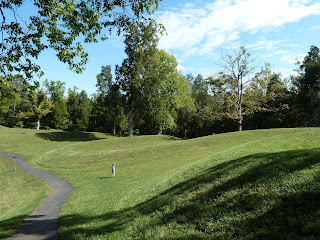 As Clancy and I continued on, we came to an overlook of the Brush Valley below. This may have been my favorite part of the morning, as the valley was simply beautiful, and the epitome of rolling farmland. I loved the white farmhouse, and the bales of hay dotting the landscape. 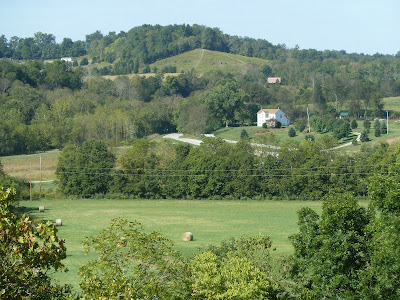 We kept going on the trail, and came to the tail of the serpent, where Clancy posed on the stone steps. He wasn't particularly thrilled to do so, but finally consented to at least sit there, even if he wouldn't look at the camera. 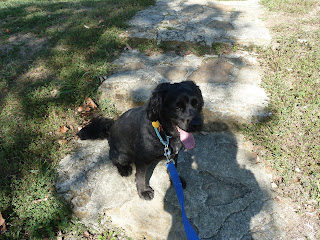 After we finished the paved trail, we headed to the Ohio Brush Creek hiking trail, which runs along the creek that borders the park. 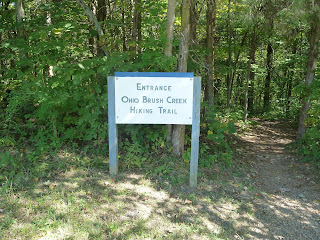 This was a narrow and uneven trail, so my klutzy self had to be very careful, but it was worth the extra care. 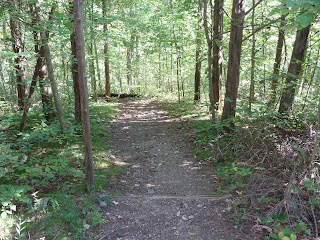 Clancy loved the creek trail, as he much prefers the shade to the sun. Even so, he wasn't any happier about having his picture taken. 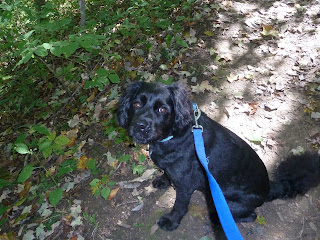 By the time we finished the hiking trail we had worked up an appetite, so I was glad I had packed a lunch. We headed to the picnic shelter adjacent to the mound. 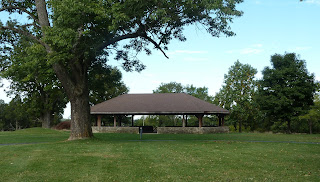 It was great to be able to sit and enjoy the peaceful atmosphere of the park while we ate lunch. And, when he wasn't begging for part of my sandwich, Clancy was happy to have a long cool drink of water. 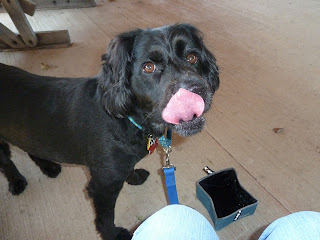 I think the Serpent Mound is my favorite of the places Clancy and I have visited, as I was fascinated by both the history and the mystery of the place. I'm a history buff, and always find the study of ancient civilizations to be very interesting. I am also always intrigued by ancient religious traditions and sacred sites, so the Serpent Mound had plenty to keep me interested.

But beyond all that, it is simply a beautiful place, and Clancy and I were fortunate to visit on the most gorgeous day we've had in months. I'm hoping the rest of our fall outings will be just as successful!
Posted by Julie Flanders at 3:16 PM