I've been a fan of Heather Holden's work ever since I discovered Echo Effect, her webcomic based on Greek mythology. So when I was catching up on the comic a few weeks ago I got the idea to commission Heather to create pictures of my Polar Night characters Danny and Aleksei.

It was a lot of fun to work with Heather and see my guys brought to life in her style. So let me introduce you to the main character and protagonist of Polar Night, Detective Danny Fitzpatrick. 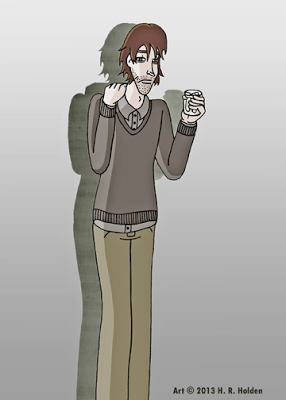 He's a mess, isn't he?  Danny is overwhelmed by grief and depression when we meet him and he's run as far away from his old life as he could get by moving to Fairbanks, Alaska. He's working a dead-end job in cold cases and his primary coping mechanism for getting through the day is alcohol.

Danny doesn't seem like a good candidate to challenge Aleksei Nechayev, the book's antagonist. Arrogant, cold, and ruthless, Aleksei views people as little more than playthings for his own amusement. 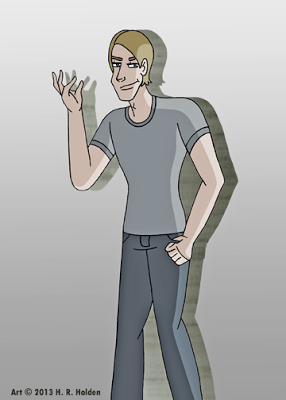 Aleksei sees Danny as a minor nuisance and doesn't think the drunken detective is a real threat to his plans. He may be surprised.

Thanks again to Heather for working on this fun project with me! If you don't already follow the Echo Effect, check it out here.
Posted by Julie Flanders at 8:37 AM