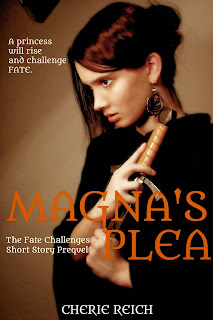 My friend and fellow Untethered Realms member Cherie Reich has a new YA Epic Fantasy short story out and it's free! That's right, FREE.

Here's a great excerpt from the story along with info on how to get your copy:

An excerpt of Magna’s Plea by Cherie Reich

Tendrils of smoke swirled heavenward. The smoldering stench reached Princess Magna at the top of the palace’s northern tower. She wrinkled her nose at the unpleasant odor, yet it still smelled better than the filth plaguing the besieged seven-hilled city.

She’d vowed to protect Amora. Her heart shattered a little more each day at the devastation afflicting her kingdom.

The once grassy and flower-filled plain sprouted dust plumes from the trampling feet. As the sun neared the western horizon, a bloody hue washed over the battlefield. Tiny, metallic dins and men’s shouts rang out. Magical bursts flashed in the sky like Thean’s lightning, beautiful and deadly. A wooden catapult hurled a human-sized stone slab into the city’s wall. Magna jerked away from the opened window she stood before, as if the object had struck her instead. Rock crumbled from the impact, but the barrier held.

When the reddish orb sank lower, the fighting ceased. War’s chaos parted into two orderly sides, and soldiers crossed the field to gather their dead.

She brushed a shaky hand over her cheeks. Tears dampened her face, and she struggled to turn away from the battle before her. Almost two months had passed since the Apenthans had begun their attack Amora. How much longer could the Amorans—she—stay safe behind their impenetrable wall?


Book Description: A princess will rise and challenge Fate.

While her father, brothers, and people fight against the Kingdom of Apentha, tenacious eighteen-year-old Princess Magna can only watch the destruction of Amora, her besieged city and kingdom. Her mother, Queen Vyvian, has refused to allow her heir to join the fray.

But Magna won't take no for an answer. She seeks out an end of the war from Prince Cyrun of Apentha, their prisoner. If she can't persuade him toward peace, then Amora may fall.

This short story prequel includes a sneak peek of Reborn, Book One of The Fate Challenges, forthcoming May 2014.

YA Epic Fantasy
The Fate Challenges #0.5
A 5500-word Short Story 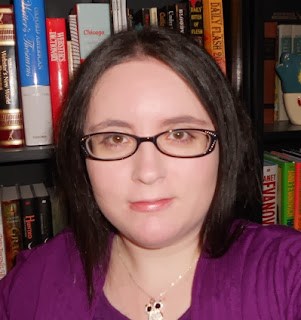 About the Author: A self-proclaimed bookworm, Cherie Reich is a speculative fiction writer, freelance editor, book blogger, and library assistant living in Virginia. Her short stories have appeared in magazines and anthologies, and her books include the horror series Nightmare, a space fantasy novella trilogy titled Gravity, and the fantasy series The Foxwick Chronicles. She is Vice President of Valley Writers and a member of the Virginia Writers Club and Untethered Realms.

Her debut YA Epic Fantasy novel Reborn, book one in The Fate Challenges, will be released on May 23, 2014.

Posted by Julie Flanders at 6:00 AM