This week I decided to share a post I wrote for the 2012 A-Z in April Challenge about a haunted landmark here in my home town of Cincinnati instead of a new ghost story. So these ghosts are much closer to home for me!


Cincinnati's Music Hall was built in 1878 and is listed on the U.S. National Register of Historic Places. It is the home of the Cincinnati Pops and Symphony Orchestras and, according to legend, it is also the home of many ghosts.

Music Hall was built on land that held an Orphanage Asylum in 1844 and, prior to that, the Commercial Hospital and Lunatic Asylum, which included a "pest house" for the indigent who were stricken with contagious diseases. When these indigent patients died, they were buried in mass graves, making the land under the present-day Music Hall a potter's field.

With that kind of history, it's not hard to imagine there could be some restless souls wandering around Music Hall. While the venue is undoubtedly beautiful, it's not a big stretch for me to believe that there could be ghosts there, as I've always thought the place had a bit of a "Phantom of the Opera" vibe. When I've been there for shows, I could easily imagine the huge chandelier crashing down into the crowd.


Throughout the years, employees of Music Hall have reported strange sounds, such as footsteps, slamming doors, and music playing when no musicians were in the building. One employee reported what sounded like a music box playing for hours in the elevator shaft. In addition, workers have seen apparitions and ghostly forms, such as an extra unknown "cast member" in a production, men and women dressed in 19th century clothing, and, most notably, a "girl in white" who frequents the auditorium. Chairs in the auditorium have reportedly been moved, and elevators set in motion when no one has pressed their buttons.

Music Hall has been renovated several times over the years and, each time, construction workers have unearthed bones. Its reputation for ghostly inhabitants has spread so far that Music Hall was featured on The Travel Channel's Most Terrifying Places in America.


Now, The Cincinnati Arts Association gives guided ghost tours of Music Hall one night a month. I've never attended a tour but, after the reading I did for this post, I can't deny I'm a little curious. 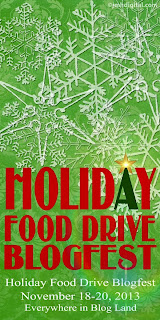 Today is the last day for the Holiday Food Drive Blogfest, hosted by M.J. Joachim and Tina Downey. The purpose of the fest is to raise awareness about hunger by spotlighting local food pantries in the hopes of helping to stock their shelves for the upcoming holidays and beyond.

I am spotlighting the Anderson Ferry Food pantry here in Cincinnati. This pantry is run out of a local church and is actually only about 5 minutes from where I live. I drive past the pantry regularly, and I've written before about what a sobering sight it is to see people lined up outside the door for food during the pantry's distribution hours. The pantry is a small operation that only serves people in our immediate area and the first time I saw the line it was a shock to realize how many people in our neighborhood are in need.

I've donated to this pantry before but this blogfest was a great reminder to do it again. Thanks to M.J. and Tina for hosting the fest!