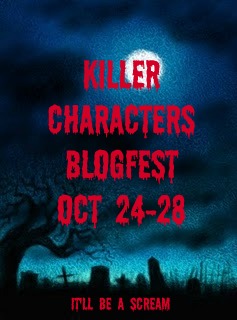 Today is Day One of the Killer Characters Blogfest, hosted by E.R. King and Deana Barnhart, and it's all about killer supporting characters.

I am cheating a little bit, as the characters I chose are primarily known as movie characters, but since the movie was based on a book I figured they could still qualify. They are so memorable to me that I couldn't resist.

I picked the velociraptors from the first Jurassic Park movie, as I think they definitely fit the bill for scary, awesome, and killer (literally!) characters. Jurassic Park (the original only) is one of my all-time favorite movies, and the raptors are a big part of the reason why.

They had me on the edge of my seat whenever they were on the screen.


I was a nervous wreck when the raptors opened the door and came inside the kitchen where the children were hiding. That remains one of the scariest and most intense scenes I've ever watched.

All of the dinosaurs were great, but, to me, the velociraptors stole the movie. When it comes to memorable supporting characters, they will always have a spot on my list.

Posted by Julie Flanders at 8:00 AM