I am excited to have my friend M.Pax, author of the just-released Semper Audacia, here as a guest today. This is the first time I've hosted a fellow blogger, and it's an honor to have Mary as my inaugural guest poster. So without further ado, please welcome M. Pax and her traveling, sci-fi loving kitties!

Travels with Makayla and Nini
by M. Pax
Makayla and Karenina [usually shortened to Nini], came to me at seven weeks old from a neighbor who had taken in a pregnant cat from a friend who had to move abroad. We lived in Fairfax, Virginia at the time. They were two years old when we moved from Northern Virginia to Portland, OR, from the east coast of the US to the west coast.
I flew with them from DC to Portland. They hated every second of it. My girls glared at that carrier and hissed at it whenever they saw it afterward. I had to throw it out, there was so much hate for it. 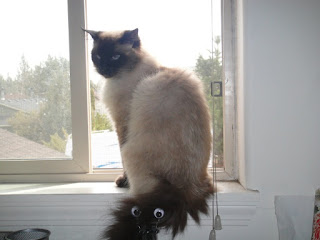 Almost four years ago now, we moved from Portland, east over the Cascades to Central Oregon. Kayla and Nini hate the car. Really hate it. Maybe not at much as airplanes, but close. All the way up Mount Hood, all’s I heard was their yowling. They’d crawl over me and scream in my ear, just in case I hadn’t heard. They wanted to be certain I did.
At some point past the summit, Nini got bored and went to sleep in the back of the car. Makayla has always been neurotic though. That’s how we ended up with Nini [which I’m very glad of]. Makayla would cry if I left a room. So, we got her some company, one of her sisters.
Anyway, so I ended up having to hold Kayla on my lap. I had to hold her up so she could see out the window. She wouldn’t sit by herself. Yeah, neurotic. She liked seeing the cows, horses and the other things, but she shook and stuck to me like glue. For several days she did. But she soon fell in love with the sunnier side of the Cascades as much as I did and she adores the bigger closets to play in.
I avoid traveling with them if I can. They’re terrible travelers. They’re also critics. They like to help me with my reading skills. If I start reading one of my stories aloud, they usually come into the room to listen. If I flub some words, they make faces of disapproval, ears flickering, eyes narrowing. If I read with spirit, they pay attention as if completely engrossed. If I read with less animation, they lose interest and may wander off. With their feedback in mind, I practiced at open mics held at my local library and at events held by my local writing group in front of people. Last time I pretended the audience was my cats. It was my best reading ever. Everyone agreed, an A++. So, they did help me hone my skills. 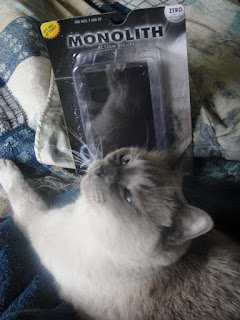 My cats also enjoy science fiction. If we pop in a Star Trek or Stargate dvd, they’re usually both down on the couch within a couple of minutes. Makayla really liked the Star Trek episode with Joan Collins when Spock built a radio. For some reason that really fascinated her. She doesn’t like to be petted when Spock is on. The pointed ears maybe?
So make believe traveling is all we do these days, which is fine. There’s little screaming involved, except for my grunts of frustration. Whenever I’m working, they’ll come hover at my feet. I think they’re asking me, “Any cats in this one? It’d be a better story with cats in it.”
There is an alien cat-like thing in Semper Audacia. Although, they thought the alien cat should have won, because cats are naturally better than everybody else, they loved that story and thought I should share it with the world. So, I did. They’re the best fans.
Do your pets help you write?
About Semper Audacia: 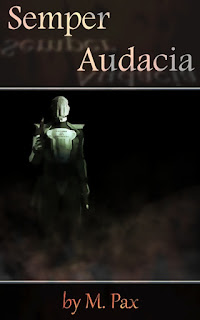 Description: Alone. Leda is the last living member of the brigade, the sole defender of her world. War took everyone she knew, leaving her in the company of memories and ghosts. Or is it madness?
The siren blares. The enemy is coming. Or is it? The approaching vessel isn't a friendly design, but it answers with the correct code. Leda must figure out whether the arrival is reinforcements or the final assault. In an aging flyer, she ventures out to meet her world's fate, the last stand. 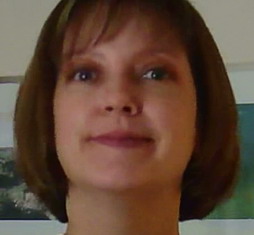 Inspiring the words I write, I spend my summers as a star guide at Pine Mountain Observatory in stunning Central Oregon where I live with the husband unit and two loving cats. I write speculative fiction mostly and have a slight obsession with giant, man-eating reptiles and Jane Austen. I know, they don’t really go together, but it’d be interesting to insert Godzilla in the middle of Pride & Prejudice.

blog: http://mpaxauthor.blogspot.com
website: www.mpaxauthor.com
Posted by Julie Flanders at 5:26 AM