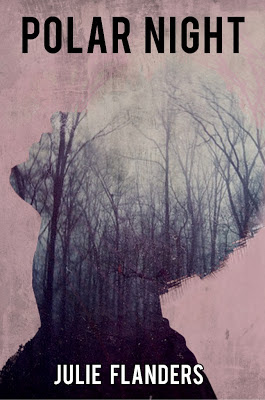 I'm so excited to be able to share the cover for my debut novel Polar Night, which will be published on February 7 by Ink Smith Publishing.

I worked with super-talented artist George Cotronis on the cover, and I'm so thrilled with the idea he came up with. When I first saw the cover I was amazed by how well he had captured the mood of the story.

I'm also thrilled to share the blurb that will be on the back cover of the book. I have to admit, just writing "back cover" makes me squee a little bit. It's still all so surreal!

But enough of my squealing. :D This is the synopsis:

When Detective Danny Fitzpatrick leaves his hometown of Chicago and moves to Fairbanks, Alaska he wants nothing more than to escape the violence and heartbreak that left his life in pieces. Numbed by alcohol and the frozen temperatures of an Alaskan winter, Danny is content with a dead-end job investigating Fairbanks' cold cases. That all changes when a pretty blond woman goes missing on the winter solstice, and Danny stumbles upon some surprising connections between her disappearance and that of another Fairbanks woman three years earlier. Forced out of his lethargy, Danny sets out to both find the missing woman and solve his own cold case.

The investigation points Danny towards Aleksei Nechayev, the handsome and charming proprietor of an old asylum turned haunted tourist attraction in the Arctic town of Coldfoot. As he tries to find a link between Nechayev and his case, Danny's instinct tells him that Nechayev is much more than what he seems.

Danny has no idea that Nechayev is hiding a secret that is much more horrifying than anything he could ever have imagined. As his obsession with finding the missing women grows, Danny finds his own life in danger. And when the truth is finally revealed, the world as he knows it will never be the same.


Huge thanks to everyone who signed up to help me with the cover reveal this week, I'm so grateful to all of you!! I drew a winner for the Amazon gift card using random.org, and Michael Di Gesu won. Congrats to Michael and thanks again to all!

I look forward to the opportunity to return the favor at any time. :)