I am happy to be interviewing author Jeff W. Horton today as part of the Blogger Book Fair. Jeff and I were paired up for the fair and have enjoyed interviewing each other. One of the best things about this fair is that I've had the chance to get to know a few more authors.

Jeff is the author of five novels:


Visit Jeff's Amazon page for all of his books.  And please read on for my interview with this talented and prolific writer.

1. Tell us about your latest book.

CYBERSP@CE-The novel is a mind-blowing, sci-fi espionage story, with ingredients of international intrigue, artificial intelligence, action, suspense, and romance. Set mostly in the Nevada desert, Cybersp@ce includes cyber warfare between nation states, the fantastic virtual world of an alien computer, and the hunt for one of the world's greatest spies.

From inside their home located outside the small town of Corona, New Mexico in 1947, a young boy and his parents, while watching a freak lightning storm, hear a loud crash, after young Henry Summers witnesses what he thinks is an alien spacecraft falling from the sky.

Many years later, Nick Reynolds is appointed as the head of a Cyber Command taskforce established to deal with the increasing cyber warfare threat from China. Soon afterwards a new, disturbing type of cyber attack emerges, just as Nick learns that an imminent massive Chinese cyber attack against the United States infrastructure might be imminent. When the evidence suggests that the threat is real and that the attack will kill millions of people, Nick discovers that his team will not have enough time or the technical resources to stop the incredibly advanced attack when it comes.

Nick soon learns of another top-secret project, however, one which might offer a way to stop the attack and spare the lives of hundreds of millions of people.

Dr. Henry Summers works with his scientist daughter, Kate, inside Area 51 at Groom Lake, Nevada. After years of trying to reverse-engineer an alien spacecraft, the team has a breakthrough when they discover how to interface with an alien ship's computer, by using a cybernetic helmet to enter a fantastic, virtual world.

2.    What genre or genres do you enjoy writing in?

I just really enjoy writing fiction, particularly with a Sci-Fi thriller edge. To date, I've written apocalyptic and post-apocalyptic novels (The Great Collapse and The Dark Age-The Survivors of the Pulse Series), and a book based on Revelation Chapter 11, the end of days, the Antichrist, and the return of Jesus Christ (The Last Prophet). I've also written a science-fiction/fantasy Christian allegory for children (The Way of Nacor: Tales of Eden Series), and I've been working on the Cybersp@ce Trilogy, which includes Cybersp@ce, Frontiers, and New Beginnings, which is a science-fiction/thriller trilogy that chronicles humanity's pioneering journeys into interstellar space.

I guess I realized I wanted to be a writer while I was in college, though it was decades afterwards before I would first publish a novel. I took a creative writing course and really enjoyed it.

I still have a day job working with information technology, though I hope to one day take my writing full-time. I really enjoy writing, so it's a dream.

Writing for me is like reading a novel or watching a movie, but it's one that I can help determine the outcome. I say "help" because it seems like stories often take a on a life of their own. That and a true sense of accomplishment!

6.    Anything you don’t enjoy or struggle with when it comes to your writing?

When I first started writing I had difficulty developing an outline long enough to encompass my novel. I started writing and would eventually be able to flesh out an outline for the remainder of the story. Eventually, I was able to start fleshing out outlines for the entire book. That's when I believe my writing really started to improve.

7.    What other passions or interests do you have besides writing?

I enjoy reading, family, the Church, and the outdoors.

Half-full, always. We have to always be mindful of how much we have to be thankful for and focus on that, rather than on what we don’t have. It's good advice, I wish I could follow it myself.

9.    What would you consider your dream vacation?

Oh, that's tough. I suppose a year in a beautiful, relaxing tropical climate with a cool breeze off of the ocean, writing my next novel!

I can definitely identify with a number of characters from my novels, especially some of the protagonists like John March from The Last Prophet and Conrad Simmons from The Great Collapse. I probably feel like I have the least in common with the antagonist from The Last Prophet, the Antichrist, Abe Addon.

Thank you, Jeff, for being here today! 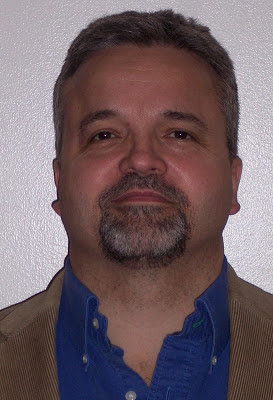 Jeff Horton's novel, THE GREAT COLLAPSE-SURVIVORS OF THE PULSE, a story about the coming of the pulse and the end of civilization, was published in 2010. THE DARK AGE-SURVIVORS OF THE PULSE, the sequel to The Great Collapse, was published in 2011, as was THE LAST PROPHET, a fictitious story about the life of John March, one of the witnesses sent by God to warn humanity about the antichrist, and the end of days. Released on September 1, 2012, THE WAY OF NACOR:TALES OF EDEN is a tale about four children, who find themselves lost and stranded on a strange alien planet and struggle to find a way home. Jeff Horton's fifth novel, entitled CYBERSP@CE, is a techno-thriller, in which the world is brought to the brink of nuclear war after a string of deadly cyber warfare attacks against the United States.

When he's not penning his next novel, he enjoys reading, going to church, and spending time with his family. Jeff Horton is a member of the North Carolina Writers Network.

For more information visit www.hortonlibrary.com or his Facebook Fan Page at http://www.facebook.com/Author.Jeff.Horton.