The Ghosts of Aquinnah and the Gay Head Lighthouse 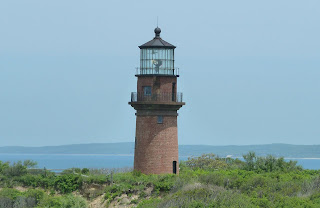 As I've mentioned on this blog before, my upcoming novel The Ghosts of Aquinnah is set on the island of Martha's Vineyard. The original idea for the novel came to me when I was looking at this webcam of the Gay Head lighthouse, which sits atop the cliffs of Aquinnah and is the oldest lighthouse on the island.

I have a sentimental attachment to the lighthouse for many reasons, not the least of which is the fact that my great-great-grandfather Samuel Flanders was the principal keeper of the light from 1845-1849 and again from 1853-1861.

Horace Greeley wrote a story about a summer in New England and on the Vineyard in an 1860 edition of Harper's magazine and Samuel, who was known around the island as Squire, was featured in the article. Based on the information in the article, Squire was quite a colorful character. Greeley wrote:


In short, notwithstanding some eccentricities of appearance and manner, no one can long sojourn with Squire Flanders without being touched with his obliging and amiable character, and impressed with his substantial worth and honesty. It is a matter of conscience with him to keep his lamp always trimmed and his light always set upon a hill.


When I visited the island back in May I learned that the lighthouse is now in danger of being demolished because of safety concerns due to the erosion of the cliffs. In June, the lighthouse was placed on the National Trust for Historic Preservation's list of the most endangered historic places in the United States. The light now stands less than fifty feet from the edge of the cliffs and needs to be moved within the next two years due to the ongoing erosion and the fact that the move will require at least forty feet of space in order to accommodate the necessary equipment.

Islanders and Aquinnah residents have started a campaign to save the lighthouse and raise the money needed to move it to a safe and sustainable location on the cliffs.

I have heard arguments that the cost of the move is simply too high and the lighthouse should be let go. While there's no question the move is going to cost a great deal of money, I think the alternative would be a terrible loss to the island and to the maritime history of New England.

I visited England some years ago and one of the things I loved the most about the trip was seeing all of the old buildings and structures that date back hundreds or even thousands of years. As a history buff, that appeals to me and I think we are often too quick to tear things down in this country.

When I am on the Vineyard and see the Gay Head lighthouse, I love to imagine my great-great-grandfather Squire and all the other people who have been there before me. I also think of how many countless people have been out in the Atlantic ocean during a dark night and seen the lighthouse beacon guiding them. I can't imagine going to Aquinnah in the future and not seeing the red brick lighthouse on the cliffs.


Are there any historic landmarks or sites that are particularly meaningful to you? Do you think historic preservation efforts are worthwhile?

On a side note, I am taking some vacation days this week and don't expect to be around the blogosphere for the rest of the week. I hope you all have a good one and I'll see you next week! :)
Posted by Julie Flanders at 5:00 AM