Cherie Reich is releasing her novel Reborn in May and I'm super-excited to be taking part in her cover reveal this week. Congratulations, Cherie! 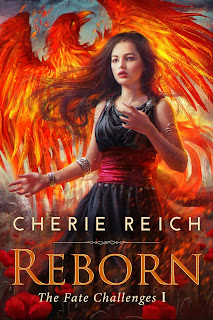 To save a kingdom, a prophetess must challenge Fate.

On the day of Yssa’s death and rebirth, the god Apenth chose her as the Phoenix Prophetess.

Sea serpents and gods endanger the young prophetess’s journey and sour the omens. Yssa is cursed instead of blessed, and her duties at the Temple of Apenth prove it. She spends her days reading dusty scrolls, which does nothing to help her forget Tym, the boy back home. But the annoying yet gorgeous ferryman’s son Liam proves to be a distraction she can’t predict, even though he rarely leaves her alone for two sand grains.

Her boring temple life screeches to a halt when visions of her parents’ murders consume her. Yssa races across an ocean to stop the future. If she can’t change Fate, she’ll refuse to be the Phoenix Prophetess any longer. Fate, however, has other plans for her and the kingdom.

Yssa must either accept her destiny or fight to change Fate. 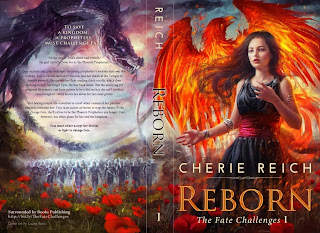 Here’s an excerpt from the prologue of Reborn:

He couldn’t forget the council’s words or how they’d cursed his fifth Phoenix Prophetess. But visions of the Kingdom of Amora in flames flashed through his mind. He could taste the ashes, like burnt charcoal, and hear her people’s screams. The prophecy of the kingdom’s destruction leaked sour bile into his mouth. The other gods, including Kisa, the Queen of the Gods, might be willing to turn their backs on their loyal people for Fate, but he wasn’t.

There was also this infant in front of him. She reminded him of his daughter. His mortal family resided in the Underworld, but he couldn’t let this child.

“Think of the consequences, my son.”

He had. They both knew the gods would find a way to curse him and this innocent child, but the price was worth saving the kingdom.

Ignoring his mother’s shrieks, Apenth leaned over the lifeless baby again. His lips pressed against her ashen forehead, so cold to the touch. Postera clawed at his arms, but he shoved away her hands. Nothing would stop him from completing Amora’s prophecy, protecting the city named after his love.

“You are mine, little one.” His hand pressed over her heart. Electric heat flowed from his glowing fingertips. They tingled, nearly burning his flesh, but his hand remained steady. Luminosity brightened around the child and him, further blocking out Postera’s pleas. The room filled with the blinding white light.

“No!” Postera screamed as the child’s life-thread ripped from his mother’s hand and joined the pulsing jewel on her belt. The piece sizzled, reattaching to the gemstone, and transformed to blood red.

The light imploded into the child. Her flesh glowed for a moment before the room’s shadows returned. A tiny strawberry-colored birthmark in the shape of a phoenix blossomed upon the flesh over her heart. The baby’s lungs filled with air, and a cry broke from her lips.

The Phoenix Prophetess was reborn. 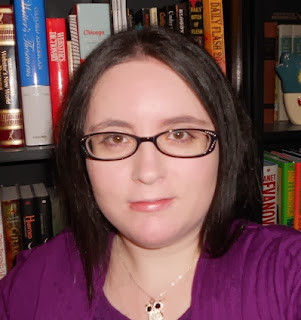 Author Bio: A self-proclaimed bookworm, Cherie Reich is a speculative fiction writer, freelance editor, book blogger, and library assistant living in Virginia. Her short stories have appeared in magazines and anthologies, and her ebooks include the horror series Nightmare, a space fantasy trilogy titled Gravity, and a fantasy series The Foxwick Chronicles. She is Vice President of Valley Writers and a member of the Virginia Writers Club and Untethered Realms.

Her debut YA Epic Fantasy novel Reborn, book one in The Fate Challenges, will be released on May 23, 2014. Add Reborn on Goodreads here.