I'm excited to welcome some excellent writers to the blog today and help spread the word about their latest books.

First up, it's my pleasure to share the cover, along with the blurb and an excerpt, for JL Campbell's upcoming release Chasing Anya. Congratulations, JL!

Been there. Done that.

Feisty and independent, Anya Davies lives by her own rules. The one thing she’s hell-bent on avoiding is a conventional relationship. Nor is she interested in romance, thanks to her abusive ex who refuses to stay in the past. The second complication in her life is a secret that condemns her to constant guilt and a solitary life. A series of near misses and escalating threats are a third and worrying factor. Only a special man would understand or live with Anya’s challenges and demands.

Casual sex...so not having that.

Enter Christophe Mondesir. Two years ago, Anya dumped him without explanation. An accidental meeting shoots Anya back on Christophe’s radar. He refuses to be denied and plans to breach the fortress Anya has built around her heart—if she’ll commit to more than a casual liaison. He’s also determined to find out what she’s hiding. That’s if the stalker who’s after Anya doesn’t end her life first.

He stood before her, pressing kisses to her neck. Then his lips covered hers. Soft. Persuasive.

She resisted him at first, but the memory of his lovemaking warmed her blood and she relaxed against him. The unknown word he’d spoken came to mind and she twisted away from him. “I’m not so sure I should let you touch me, ’specially since I don’t know what you said earlier. What was that anyhow?”

“I said you should stop talking like a slut.”

She mashed his toes with her foot. “How dare you talk to me like that?”

“Ouch! If you insist on treating sex as if it is some sort of pill—”

“If you were sensitive to my needs, I wouldn’t have to resort to asking for sex.”
He narrowed his eyes. “You know what? I’m going to give you what you want.”

That said, Christophe pressed his lips to hers, forcing her mouth open. She fought him, but this time he ignored her attempts to escape.

The intensity of his kiss frightened her. His grip on her arms was too tight and she felt suffocated by his strength. “No, Christophe, I—”

His hand glided under her shirt and the words lodged in her throat. She cast aside her objections, swept away by the fire his touch lit on her insides.

They landed on her bed, struggling to free themselves of their clothing. Minutes later, Christophe reduced her to an orgasmic shudder.

Then they started over.

When they were satisfied, she panted against his chest.

Christophe eased away from her and rolled onto his back to stare into a corner of the room.

Now what was wrong with him? She raised herself up on her elbow. “What’s bugging you now?”

It took him a while to look her in the eyes. “D’you realize I just raped you?”

She almost giggled. “Well, it was the best rape I ever had.”

He murmured something she didn’t hear and rolled onto his side, away from her.

Anya stared at a mole on his shoulder, unable to believe what she was seeing and hearing. Was he serious? Wasn’t she supposed to be the basket case?

She scratched at the skin around the cast. It was itching like hell lately.

Christophe got up and went into the bathroom. The toilet flushed and she waited for him to come back to bed. Instead, he got a pair of jeans from the cupboard and pulled them on, along with a tee-shirt.

Anya gaped at him. “Where the hell d’you think you’re going?”

“What d’you need to think about, Christophe?”

She yanked her shirt on and stood in front of him. “Every time I get mad and tell you to leave, you refuse to go. Now, we don’t even have a serious quarrel and you’re running away. What’s wrong with you?”

He slipped both hands in his pockets and wouldn’t look at her. “I have to go.”

Using her hand, she tipped his head so she could see his eyes.

He was in pain.

She didn’t understand what the problem was, but something had gone terribly wrong. She grabbed his arms and spoke softly to him. “Don’t walk out on me now. I don’t know what’s going on with you, or what you think you did, but I need you.”

“I’m sorry, Anya.” He stepped out of her grasp and walked away.

She sank on the bed, rubbing the frown line on her forehead. Would he be all right? Her heart rate went up and she pressed a hand to her chest. Christophe had left, but she needed to check whether he’d locked up.

The lock was engaged and she was alone in the house. She leaned against the front door, feeling as if she’d bought a bus ticket and the driver had dropped her off miles away from her destination.

Her eyes smarted, but she would not cry. While she was sure Christophe’s withdrawal was directly related to her, she sensed there were other factors at play.

If he didn’t want to talk, how could she get to the root of what was eating him?

J.L. Campbell is a proud Jamaican, who is always on the hunt for story-making material.

Where to find JL Campbell:

Fabulosity Reads Book Promotions is a book touring website that promotes authors and their precious works to an extensive audience using blogs, twitter, Facebook and other Social Media, with the aim of introducing them to an appreciative readership.

Next up, Nutschell Windsor is here to talk about using photo prompts to spark your writing and share all the information about her new anthology release Story Sprouts.  Isn't that a fantastic name for a book? Welcome, Nutschell! 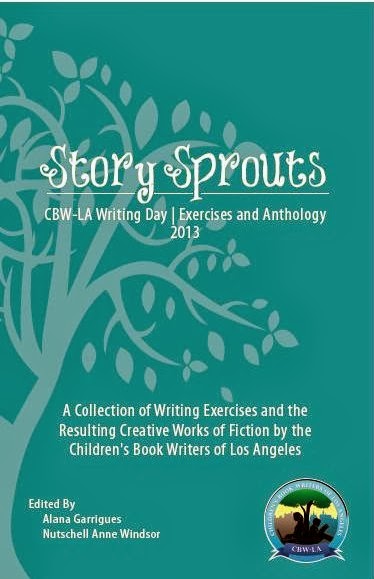 “A picture is worth a thousand words.”

A single image can convey a thousand different thoughts, which is why pictures are a wonderful vehicle for story generation.

Pictures can serve as time-traveling devices, taking the viewer back to a time long past, or fast-forwarding them into an era that is yet to be. They can evoke powerful emotions, provoke interesting thoughts and incite new perspectives.

When I facilitated the Children’s Book Writers of Los Angeles’s (CBW-LA) first ever Writing Day Anthology Workshop last summer, I used a series of writing exercises to guide the participants through the process of producing two pieces which were published later on in STORY SPROUTS: CBW-LA WRITING DAY EXERCISES & ANTHOLOGY.

One of the exercises we used during the workshop was called “Shopping for Story Ideas.” In this exercise, I passed around a box full of photographs of various shops and stores around the world. The colorful pictures sparked many stories, providing participants with a setting to grow their story in, and even giving them ideas for characters and plot lines.

You can use this same exercise to generate your own stories. Go to Google’s Images tab and type “photographs.” You can even type the story genres like “fantasy”, “romance” or “adventure.” Download the images that speak to you or spark your imagination and keep them in a file.

If you’re not into digital files, you can also cut out pictures from magazines you may come across or photocopy images in books that resonate with you. Keep all of these images in a folder or box. Whenever you’re low on story ideas or in need of some writing kick-starters for the scene you’re working on, simply open those folders for inspiration.

This exercise will also train your mind to be on the constant lookout for story ideas. The more you perform this exercise, the more you’ll find your creativity heightened.

What happens when linguistic lovers and tale tellers workshop together? Inspiration. Wonder. Discovery. Growth. Magic.
Brave and talented, the writers featured in this anthology took on the challenge of dedicating one day to the raw and creative process of writing.
A rare view into the building blocks of composition, Story Sprouts is made up of nearly 40 works of poetry and prose from 19 published and aspiring children's book authors.
This compilation includes all of the anthology writing exercises and prompts, along with tips, techniques and free online writing resources to help writers improve their craft.