B is for Beetlebung & the April IWSG


Beetlebung Corner is the heart of the town of Chilmark, which is located on the southwestern part of Martha's Vineyard. The town hall, Community church, library, and community center are all located at this corner.

For most of my life I thought beetlebung was merely a type of tree. It is, but it is called Nyssa sylvatica or tupelo everywhere in the world except on Martha's Vineyard.

The term beetlebung comes from the island's whaling history. Whaling was a booming industry on the Vineyard for much of the 19th century, as whale oil was in high demand throughout the world. The Vineyarders stored the oil in large wooden casks for exporting, and the tools they used to make the casks were harvested from the local tupelo trees. They made wooden mallets called "beetles" and wooden stoppers called "bungs" for use with the casks, and thus the trees became beetlebung trees.

The whaling industry is long gone, but the beetlebung name remains.

The picture below was taken at Beetlebung Corner and is a good example of the town signs that are commonplace on the island. I've always liked this corner because when we come to it from our cottage in West Tisbury it means we are close to two of my favorite places, Menemsha and Aquinnah. 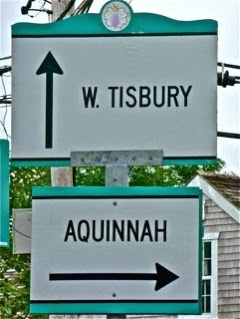 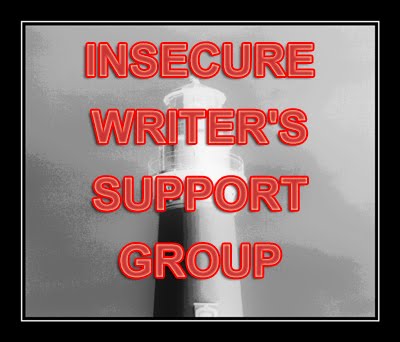 Today is not just "B" day for those of us participating in the A to Z Challenge, it's also the day for the monthly meeting of the Insecure Writer's Support Group, hosted by Alex J. Cavanaugh.

This month I'm insecure about the same thing I was last month - public speaking and the author events I have coming up in May and June. But as I posted on Friday, I participated in a small event for local authors last week and had such a good time that I feel much better about the other events now. I've also been practicing and following the great advice I received from others last month, so I feel more secure about the whole thing. Fingers crossed that continues! :)

My A-Z of Martha's Vineyard theme is inspired by my book, The Ghosts of Aquinnah, which is set on the island. Click here for all the info on the book.
Posted by Julie Flanders at 4:00 AM