A Guest Post from Guilie Castillo and the "Who Roams Here?" Grand Prize Winner

I'm thrilled to welcome Guilie Castillo to the blog today and honored to be part of her tour for The Miracle of Small Things.

Before I get to her post, I also want to congratulate Guilie for winning the Grand Prize in my "Who Roams Here?" game for the Realms Faire. Congratulations, Guilie! And thanks again to everyone who came by here and visited my ghosts and me throughout the week. We all had a great time.

And now I will turn this over to Guilie, who is sharing a post about a subject dear to my heart, dogs and animal rescue. 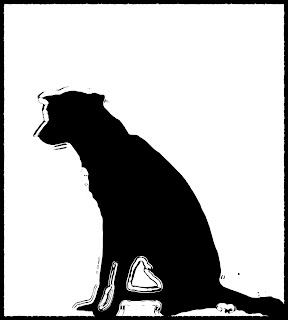 Can I have a round of applause, please, for hostess extraordinaire Julie Flanders? Julie, what an honor to be hosted here at your space. Today is the (sort of) halfway point of the MIRACLE tour, and this deserves an extra-special post.

The subject of Al, the 100-lb dog that gets rescued by main character Luis Villalobos, has come up often on the tour, but as a sideline. I thought it was time to give Al the spotlight. What better place to do that than here, at a fellow animal-rescue advocate’s blog?

Al and his eleven siblings were born behind a shed in the yard of the family his mother belonged to. The children discovered the puppies a week later. They weren’t cruel, the children, but they were rough, and their little hands sometimes grasped too tightly. They laughed when the puppies cried, and the bigger humans kicked at the mother dog when she tried to protect her babies.

The puppies went fast. The mother had passed on her regal size and bearing, and her blue-black coloring, to all twelve; people thought they’d make good breeders. Here in Curaçao black dogs inspire a special kind of fear (bonus points for size). Which translates to a tidy side income.

Al was the last to go. He became very close to his mother. She taught him to hunt lizards, to cross streets, and to dodge the big male human’s kicks.

Eventually, another big male human came and took him away in a crate. He felt the scent of his mother fading along with the sound of her desperate yapping, and knew helplessness for the first time.

For days he refused to leave the crate. Different people peered in at him, offered things that smelled incredibly good, pleaded with him. But there was no violence, even when he growled. He couldn’t help himself. It was fear, but also despair. Where is my mother?

But she, too, faded. And so he forgave, and forgot, and came out of the crate to discover a dreamland of lawns and soft beds, of endless, delicious food, and a child that played with him not as a toy but as a friend. And never hurt him.

The family, in the military, was reposted to Holland. And the dog had to stay behind.

At first the neighbors fed him, but then he was forgotten. Hunger drove him to the streets; he was eight months old, huge but still growing. He hunted lizards, and remembered his mother. He would go back to her.

He was big, but not savvy. Gangs of dogs bit and tore and chased him away. He grew thin, then skinny, then mangy. Ticks infested his ears. Humans threw rocks and firecrackers, tried to run him over with their cars.

He lost all sense of direction, and of purpose.

And so it was that, a year later, he chased an iguana over a wall and into a chalkstone patio. He almost had her, could almost taste her, when someone shouted and threw something and he had to escape. He waited, just outside the wall, and when it was quiet he jumped over again. That iguana would be his first meal in days. But she was gone. And he had no energy left.

That’s how Luis found him. Sitting on his patio. A monster of an animal, so rangy his head looked huge, malformed. But a dog, nonetheless. And Luis, who’s never had pets (never wanted any, really), will take him in and give him a name: Al, after Alfred Prufrock. (That’s another story.)

Al’s story, for all its wretchedness, isn’t unique. In a place like Curaçao, with so many temporary residents and little culture of animal welfare, abandonment is our daily bread. It’s such a disconnect for me that so much suffering should exist in places we tend to think of as “paradise”… How can our paradise be a hell for others?

Several organizations are at work to make Curaçao a paradise for humans and animals. These are some of them, in case you want to check them out (and a follow on Facebook goes a long way):

Are you involved with animal advocacy in your area? What challenges do you face that you feel are specific to your community? Do you have a rescued animal at home?

Julie, thank you so much for your warm hospitality! Al sends his love. (He actually sent liverwurst treats, which I tried to explain probably wouldn’t mean to you what they mean to him, but… His heart is in the right place.)

ABOUT THE MIRACLE OF SMALL THINGS: Mexican tax lawyer Luis Villalobos is lured to the tiny island of Curaçao anticipating a fast track to the cusp of an already stellar career. But the paradise we expect is so rarely the paradise we find.

Available as paperback, and in Kindle, epub, iBook, and Kobo formats. Find it on Goodreads and Facebook. 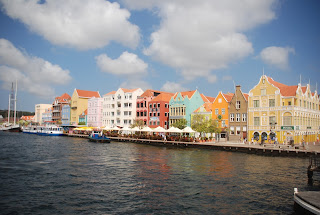 ABOUT GUILIE: A Mexican export who transferred to Curaçao “for six months”—and, twelve years later, has yet to find a reason to leave. Her work has been published online and in print anthologies. THE MIRACLE OF SMALL THINGS is her first book. Find Guilie on Facebook and Twitter, at Quiet Laughter where she blogs about life and writing, or at Life in Dogs where she blogs about… well, dogs.

ABOUT THE TOUR: To celebrate the e-book release, THE MIRACLE OF SMALL THINGS is going on virtual tour. Several blogs are hosting Guilie throughout November to talk about writing, the book, its island setting and its characters — including a 100-lb. monster dog rescued from the streets — and some of the issues MIRACLE touches on, such as the role of large and small things in the realignment of our values, and the power of place in our definition of self.
Posted by Julie Flanders at 4:00 AM