E is for Eden Park

Eden Park is one of Cincinnati's most popular parks, and also one of the oldest, as it dates back to 1859. The park is home to the Cincinnati Art Museum and the Cincinnati Playhouse in the Park, among other attractions.

Clancy and I visited Eden Park on a Sunday morning in early March, when the signs of spring were just beginning to make their presence known. 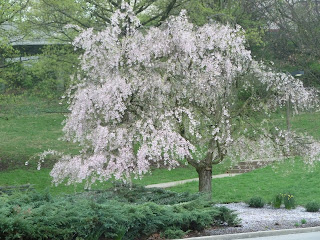 My favorite part of the park is the Twin Lakes area, which used to be an old stone quarry. On a normal day, one of the highlights of Twin Lakes is an overlook of the Ohio River, but on this particular morning the fog over the river was so thick that I easily could have believed there was no river below us at all.

Thankfully the fog didn't take over the rest of the area, and Clancy and I had a nice walk through the gardens surrounding the small lakes.

We found this statue of a Japanese cormorant fisherman in one of the gardens.


I had no clue what a cormorant fisherman was, but according to a nearby plaque, the cormorants are seabirds and fishermen in the city of Gifu, Japan began training the birds to help them fish more than 1200 years ago. The statue was a gift from Gifu to Cincinnati back in the 1990s, when the two became "sister cities."

We moved on and found another statue.


This time I was the one who thought it was creepy and, honestly, one of the ugliest statues I've ever seen. It is a bronze replica of the Capitoline Wolf, and it was a gift to Cincinnati from the Italian government back in 1931. Interesting, but still ugly in my book.

At the far end of the lakes area, we came across a path that led nowhere, or at least, to nothing but a dead end overgrown with weeds and thickets. Near the end of the path, and not easily seen from the gardens, is a World War I memorial that is dedicated to the Battery F, 136th Field Artillery. It was dedicated in 1925, and lists the battle honors and the names of those commemorated.

I noticed that the inscription on the memorial said that it was "erected by the mothers." I found it very haunting, and also kind of sad that it seems to have been forgotten, as it is so removed from the bustle of the rest of the area.

As a history buff, I like all of the nods to history that can be found in Eden Park. Another popular area of the park is the Hinkle Magnolia Garden, which includes this picturesque gazebo.


Across the street from the gazebo, I found this stone among the flowers. The inscription reads "Find Me a Voice with which to speak For those who speak no more."


The stone was presented to the park by the Ensemble Theatre of Cincinnati in 1995, on the 50th anniversary of the Holocaust. I found the simplicity of the stone very powerful, and effective, as the words speak for themselves.

Eden Park is an unusual combination of history, beauty, and recreation, and as such it is the most diverse of the parks Clancy and I have visited. I actually made a return trip to the park recently for my K post, so I'll be sharing more about this local gem then.

See you tomorrow for F!
Posted by Julie Flanders at 7:30 AM