R is for Reds


As I made clear in my Bengals post, Cincinnatians don't have much to cheer for when it comes to professional sports. Sadly, our baseball team, the Cincinnati Reds, is nearly as incompetent as our hapless Bengals.

It wasn't always that way. I grew up during the 1970s and the era of the Big Red Machine, when the Reds won back-to-back World Series Championships and dominated the National League. The Big Red Machine is considered one of the best baseball teams of all time, and it was a lot of fun to be a Reds' fan when I was a kid. But, with the exception of one World Series title in 1990, the pickings have been very lean ever since.

I'm not a huge baseball fan, but I always cheer for the Reds, and I love all of the history behind the team. First known as the Cincinnati Red Stockings, the Reds have been around since 1869, and they were baseball's first all-professional team.

My mom is a life-long Reds fan and first went to games with her aunt at Crosley Field, which was the Reds' home field from 1912 through 1970. Crosley Field hosted the first night game in baseball history in 1935, and saw many historic events throughout its long history. My mom remembers going to see Jackie Robinson play when he came to Crosley with the Dodgers in 1947.

One of the reasons I love sports is the sense of family and connection that is passed down through generations of rooting for the same team. Decades after my mom went to Crosley with her aunt, my sister, brother-in-law, and I went to a game with her last year at the Reds' current home, Great American Ball Park.


My sister managed to secure seats in the front row right behind home plate, and we had a great time in spite of the fact that the temperature was 100+ degrees on the day we attended the game. The Reds won, which made the heat more tolerable. It was fun to have seats so close to the field, and I was able to get some pictures of my mom's favorite player, first baseman Joey Votto. 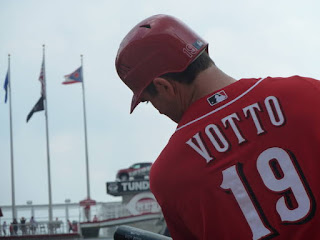 Votto was the National League MVP in 2010, when the Reds won the Central Division. We were all very excited and gathered together to watch the playoffs, only to have the Reds go three and out against the Philadelphia Phillies. It wasn't enough for them to just lose, they had to enter the record books doing it by coming out on the losing end of Roy Halliday's no-hitter, which was only the second no-hitter in postseason history. Like the Bengals, the Reds really know how to lose in style.

But every year is another chance, and the city was buzzing with excitement for Opening Day back on April 5. The Reds won that game, but have only managed to win four games since, giving them a 5-8 record to start the season. Last week, the Reds scored a whopping total of 10 runs while losing five out of six games. But yesterday's win against the St. Louis Cardinals was a bright spot, so maybe things will start to look up.

It's obviously much too early to give up on the season, but it's always difficult to be optimistic about sports in this city. We know way too much about losing around here and, for decades now, we've simply come to expect it.

Posted by Julie Flanders at 5:27 AM