K is for Krohn and L is for Little Miami

I am playing catch up today because I've been sick and unable to post. I'm finally feeling a little more alive, so I thought I would just combine my K and L posts so I can get up to date on the A-Z.


The Krohn Conservatory is located in Eden Park, which I wrote about for my "E" post. The building itself is interesting, as it was built in 1933 during the Art Deco era. The Conservatory contains more than 3,500 plant species from all over the world.

When I visited Krohn a few weeks ago, they were finishing up a special exhibit called "Sparkle and Bling," which featured colorful beads and glass displays in addition to the flowers. The exhibit room was filled with displays of lilies, which are probably my favorite flowers.


I also loved the creative mobiles that hung from the ceiling.

One of my favorite things about Krohn is the permanent rainforest exhibit. One room is devoted to a recreation of a tropical forest, and I would imagine it's as close as you can get to a jungle without actually being there.


The sounds of the waterfall, and the steam surrounding it, merely add to the atmosphere.

Dogs aren't permitted in Krohn so Clancy couldn't go with me on that visit, but he did come along on my next trip, to the Little Miami Scenic Trail.

The Little Miami Trail is more than 78 miles long, and runs through five southwestern Ohio counties. It follows the old railroad lines, and is used for walking or running, biking, and horseback riding. It is the longest paved trail in the United States. 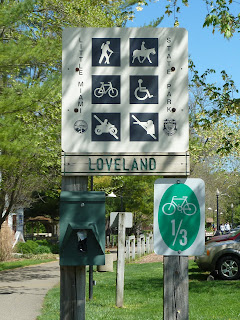 Clancy and I decided to pick up the trail in Loveland, which is a small city about 15 miles northeast of Cincinnati. As we drove into Loveland, we saw a sign that said "Welcome to Loveland: The Sweetheart of Ohio." It made me laugh, but it also seemed appropriate, as the town is very charming.

I loved this sign next to the lot where Clancy and I parked.


The trail follows the Little Miami river, and it wasn't long before Clancy and I were completely out of earshot of any traffic or city noise.

The only thing we could hear was a woodpecker, who was furiously pecking a tree and driving Clancy crazy because he couldn't figure out what was causing the noise. I know the woodpecker was in here somewhere, but I never did spot him.


Clancy and I didn't have enough time to do much exploring on the day we visited the trail, but I'm definitely planning to return and check out other sections over the summer. I'm not sure if we'll hit all 78 miles, but we'll give it a shot.

Hope everyone has a great weekend coming up! :)
Posted by Julie Flanders at 8:21 AM