G is for Glenwood Gardens 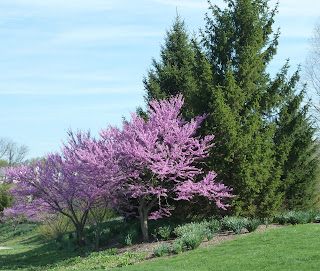 Glenwood Gardens is a 335-acre park located in the northern suburbs of Cincinnati, and it is part of the Hamilton County Park District.  I have to admit I'd never even heard of Glenwood until I came across it while looking for something to use for "G," but I'm glad to have discovered it because it's really a beautiful place.

The park contains a 1 mile paved trail as well as a longer nature trail called a Wetland Loop. Clancy and I were short on time when we visited, so we just stuck with the paved trail.

I loved this arch at the start of the trail, as well as its accompanying building, the Cotswold Visitor Centre. I am a total Anglophile, so just the name Cotswold made me smile. 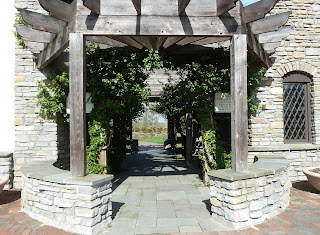 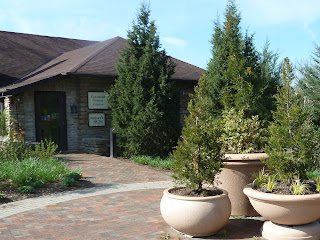 As we walked along the trail, we came upon this bridge that I liked the look of, and also found quite interesting. 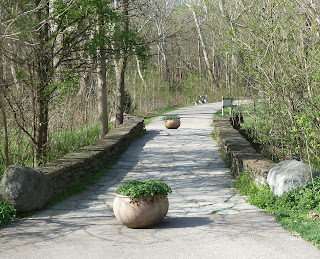 The bridge was built in the early 20th century, when the park was farmland, and is made of indigenous stone from the bedrock of Southwestern Ohio, along with granite boulders left behind by the glaciers. Apparently, Ordovician fossils are plentiful in the bridge. In addition, a hill near the bridge, which I assumed was nothing more than one of the rolling hills that are so typical of this area, is actually a mound believed to have been built by either the Adena or Hopewell peoples of the Woodland era.

It was interesting to discover that what I thought was a brand new park actually has a great deal of history behind it.

When Clancy and I visited it was still too early in March for the park's gardens to be in bloom, but I've no doubt they are stunning. I plan to make a return trip later in the spring so I can see Glenwood at its best.

With that, I'm thrilled to have finished the first week of the A-Z Challenge! To my fellow A-Zers, kudos to everyone for a great first week. I admit I've had some trouble keeping up with my blog visits and also checking in with new blogs, but I'm hoping I will be more organized next week.

Happy Easter and Happy Passover to all who celebrate, and happy weekend to everyone!
Posted by Julie Flanders at 8:07 AM