F is for Findlay Market

Findlay Market is the oldest continuously operated public market in Ohio, and is located just a few blocks from downtown Cincinnati in the Over-the-Rhine area. The Market was built in 1852, and was listed on the National Register of Historic Places in 1972.

The Over-the-Rhine district is considered an "intact" 19th century urban neighborhood, and is also on the National Register. Its name comes from the German immigrants who were the original inhabitants and builders of the neighborhood. At that time, the neighborhood was separated from the downtown area by the Miami and Erie canal, and residents called the canal "the Rhine" after the famous Rhine river of their homeland. The neighborhood, which was north of the canal, became Over-the-Rhine, or "über'm Rhein" in German.

My maternal grandparents were 100% German, and they lived in Over-the-Rhine in the early part of the 20th century. My grandmother shopped at Findlay Market, which she simply called "market."

I thought it would be fun to take a trip down to Findlay Market myself for my A-Z of Cincinnati, and walk in my grandmother's shoes for a while.

My mom went with me for my trip, and we were both surprised at how packed the Market was even early on a Saturday morning. It wasn't easy to find a place to park and, once inside, we were greeted with all the sights and sounds of a bustling marketplace. 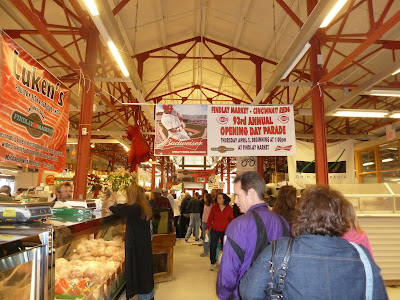 The most tempting vendor for me was a waffle stand called A Taste of Belgium. 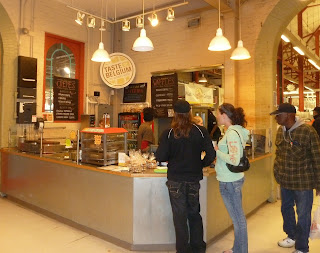 I found the story behind the waffle stand interesting, as the owner, Jean-François Flechet, grew up in Belgium and came to Cincinnati while working for a market research company. He wanted to re-create the waffles of his home here, and opened a small temporary stand at Findlay Market in 2007. The popularity of the waffles spread quickly through word of mouth, and now Flechet operates a Belgian Bistro in addition to his permanent Taste of Belgium stand, and his fantastic waffles have been featured in both local and regional media.

I love waffles and breakfast foods of all kinds, so my tongue was hanging out at the thought of these waffles. But there were so many sweets everywhere we looked at the Market, I could have easily gained 100 pounds in one morning if I had tried them all.

My impression of Findlay Market is that it has come full circle. Once the go-to place for produce and meat for the German residents of Over-the-Rhine, it and other urban markets fell out of favor when city residents began moving to the suburbs and shopping in suburban supermarkets as the 20th century progressed. But Findlay Market has come back in style again now as many people choose to live downtown again, and the Market is a flourishing and vital part of the movement to buy locally-grown and locally-produced food.

It's great to see such a historical place remain as a vibrant and thriving part of the community.
Posted by Julie Flanders at 4:56 AM